Stephen Harper is visiting New Zealand as the tiny Pacific Rim country undergoes a divisive debate over changing its national flag in which Canada, of all countries, figures prominently.

Prime Minister John Key, the leading proponent of reinventing New Zealand's flag, wants to strike the Union Jack from the national banner to put his country's colonial past behind it. He's repeatedly held up Canada's 1965 switch to the Maple Leaf as the rationale for abandoning his nation's existing Blue Ensign – though the Kiwi flag flap also manages to encompass the All Blacks rugby team and Islamic State militants.

A former British colony, New Zealand still has the Union Jack in the upper left corner of its flag, while the blue background also features the stars of the Southern Cross, a constellation visible from the southern hemisphere.

Mr. Key, who last month announced binding referendums on the matter for 2015 and 2016, says Canada's iconic Maple Leaf is proof that change is good.

"Back in 1965, Canada changed its flag from one that, like ours, also had the Union Jack in the corner, and replaced it with the striking symbol of modern Canada that all of us recognize and can identify today," the Prime Minister said in a major speech on the proposal.

Polls suggest New Zealanders are close to equally divided on the matter.

Andrew Holland, an IT consultant from the New Zealand city of Hamilton, called the flag debate irrelevant and a distraction from important matters. "I think it's a lot of smoke and mirrors. There are bigger issues I think like poverty, inequality and education," Mr. Holland said. "I don't think much will change if the flag changes."

Erin Ray, an Auckland student, said she doesn't see the point in changing. She immigrated to New Zealand from Zimbabwe and obtained citizenship, and the existing flag represents the country she's come to call her own.

"I think it should stay the same," Ms. Ray said. "I don't like the alternatives."

Mr. Key, who won a third term in office in September, has said his personal favourite design would use the silver fern logo popularized by New Zealand's national All Blacks rugby team.

"Long decades of sweat and effort by our sportsmen and women in many codes over countless competitions give the silver fern on a black background a distinctive and uniquely New Zealand identity, and a head start in our national consciousness," he argued in a March, 2014, speech.

"For example, it's our silver fern, rather than our flag, that's etched in the crosses marking the final resting place of all New Zealanders who are interred in Commonwealth War Graves overseas. Interestingly, it's the Maple Leaf that's etched in the crosses of Canada's fallen in those same cemeteries. " But the white-silver fern, normally set against a black background, has a design flaw that is particularly evident in 2014. When rendered as a flag, this design bears a passing resemblance to the black banner with white writing flown by Islamic State militants.

These days, the New Zealand Prime Minister said he prefers a flag design that drops the colour black but incorporates the fern anyway.

Mr. Key said he's also irked by the international confusion over the flags of Australia and New Zealand, both blue ensigns with the Union Jack in one corner.

"The number of times … I'm at a huge international meeting and they sit me down in front of the Australian flag," Mr. Key said told an Auckland talk radio show. "It's not funny. It happens all the time."

Officially, the Canadian Prime Minister's Office declined to wade into the Kiwi flag debate. "That is a decision for New Zealanders to make," PMO spokesman Carl Vallée said.

Mr. Harper and Mr. Key meet Friday in Auckland to talk on global security threats, trade and China. But the New Zealand politician shouldn't rely on Mr. Harper, a traditionalist conservative, for support in his flag campaign.

The leading opponent to changing Canada's flag in the 1960s was Progressive Conservative prime minister John Diefenbaker, whose party was the political predecessor of Mr. Harper's Conservative Party.

Earlier this year, Mr. Harper said that while he loved the Maple Leaf, the 1960s flag debate was a wrenching experience for Canada that he wouldn't want repeated.

"We had that debate in the mid-1960s," Mr. Harper said in June when asked about a talk in Australia of replacing their flag. "It was a very divisive debate. It's not necessarily the type of debate I would advise other countries to undertake."

The ‘Saudi Arabia of milk’ pushes Canada to open its dairy market
November 11, 2014 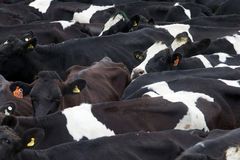 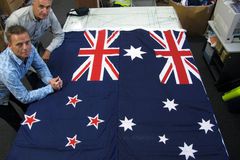 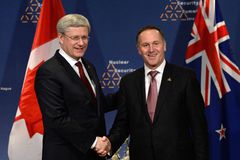