Justin Trudeau won the Liberal crown with a crushing victory that brings a new guard to the helm of the party and heralds a competitive era in federal politics.

The result caps off a campaign that was launched in a mix of fanfare and skepticism seven months ago, leaving the Liberal MP at the head of a united party and with the top members of his leadership team now set to run the next election campaign. The party remains light on policies at the end of its leadership race, leaving Mr. Trudeau with the challenge of translating his personal appeal into a cohesive electoral platform and slate of candidates by the next election, scheduled for 2015.

For Mr. Trudeau, winning the leadership is only the "first stop" in his plan to rebuild the party and win the next election.

His campaign team has long admired the ability of the likes of Tony Blair and Barack Obama to put their personal touches on a modern way of doing politics, and wanted to create a Canadian version of a broad-based, centrist approach to a grassroots politics. The goal is to transform the Liberal Party – a core institution of Canadian history – into a movement for the post-partisan age.

Mr. Trudeau, 41, won with 80 per cent of the votes, and Liberals said the 104,552 votes that were cast represented the highest number in a national leadership race in history. With a large social-media presence, Mr. Trudeau has proven an adept fundraiser and attracted thousands of new volunteers to the Liberal cause, emerging from the race with a powerful database of supporters.

Mr. Trudeau and his team put together an army of 12,000 volunteers. In addition, votes were cast in all 308 federal ridings, indicating that the Liberals have organizations – and the all-important lists of potential supporters – right across the country. Team Trudeau now plans to build on those supporters and organizations in the run-up to the next election.

Mr. Trudeau said in his victory speech he will not tolerate infighting among so-called Chrétien or Martin Liberals, arguing that Canadians rejected the party in recent elections because it had turned its back on them.

"The era of hyphenated Liberals ends right now," he said to sustained applause in a packed ballroom at the Westin Hotel in Ottawa.

The Liberal MP for Papineau becomes the 13th permanent leader of the Liberal Party, and the sixth since his late father, Pierre Trudeau, quit in 1984.

His convincing victory has his rivals on notice, with the Conservative Party already taking shots at his lack of "judgment or experience." The NDP, meanwhile, moved further to the centre at a convention over the weekend, withdrawing references to socialism in its constitution and hoping to keep the Liberal Party firmly in third place in the House of Commons.

However, recent polls have placed the Liberals in first place among voters, including Friday's survey by Nanos Research that had the party at 35.4 per cent, ahead of the Conservative Party (31.3 per cent) and the NDP (23.6 per cent). The bounce could be temporary, but the numbers offer a sense that Canadian politics are getting more unpredictable and lively.

Mr. Trudeau attacked the Harper government Sunday as unambitious and divisive. He urged Liberals to rediscover their "sunny ways" and audacity. Still, he acknowledged that Canadians remain largely cautious about the Liberal Party, and vowed to earn their respect with resolve and hard work.

Mr. Trudeau said one of his first stops as Liberal Leader will be in Labrador, where there will be a by-election on May 13. He also threw his support behind the aboriginal Idle No More movement, which has proven to be a headache for the Conservative government.

"This has been a great campaign. We are fiercely proud that it has been fuelled by volunteers," he said, congratulating everyone "who stepped up."

Second-place finisher Joyce Murray took only 10 per cent of the support with her controversial plan to foster increased co-operation with the NDP and the Green Party in the next election. She told reporters that the idea "has not died away," although both Mr. Trudeau and NDP Leader Thomas Mulcair have rejected it.

Apart from Mr. Trudeau, the recipient of the biggest applause at the leadership announcement was former prime minister Jean Chrétien. The former Liberal leader attacked the NDP on national unity, and the Conservative government on foreign policy.

Mr. Trudeau has not broken new ground with his policy proposals since he launched his campaign in his Montreal riding on Oct. 2, which would have been the birthday of his late brother Michel. Instead, Mr. Trudeau has laid out a set of core values and priorities – education, free trade, the environment – while promising to bring about more modern and positive politics to the country.

The Liberal plate is full: The party finished third, with less than 20 per cent of the vote, in the 2011 election.

Mr. Trudeau's campaign has been in the works for years as he has long discussed a foray into politics with his friend and adviser, Gerald Butts. The pair enlisted a small band of Liberal advisers to form a core campaign team last year after winning the support of Mr. Trudeau's wife and mother of his two children, Sophie Grégoire.

Before announcing their intentions, Mr. Trudeau's team conducted a poll that found that the overall image of the Liberal MP was positive and with room to grow, leading to a campaign based almost entirely on his persona and his view of politics.

"Our going-in assumption, and it's basically what we built the entire strategy around, was that the more people get to know him, the more they are going to like him," a Trudeau adviser said in an interview. "There was a general sense of goodwill toward him." 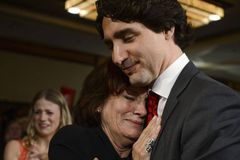 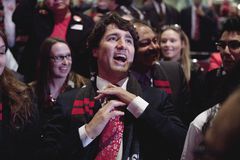