Resigned, perhaps, that federal government approval of the Northern Gateway pipeline is inevitable, opponents of the project are formulating a plan to make sure British Columbia's politicians remain opposed to the project.

For months now, members of the Dogwood Initiative have been preparing for a provincial referendum akin to the vote that forced the Liberal government to repeal the harmonized sales tax in British Columbia.

Should Ottawa give the pipeline the go-ahead by this Tuesday's deadline and the province issues the necessary permits and authorizations, spokesman Kai Nagata said his group will be ready.

"In a perfect world, politicians would do what they say they're going to do and the province of British Columbia's clear rejection of Northern Gateway would stand," Nagata said.

"But life doesn't always work that way. So the initiative build is a strategy to basically hold our provincial politicians to their word on this project."

The B.C. government officially declared its opposition to Northern Gateway and told the federal panel reviewing the project that it shouldn't go ahead as planned.

When Premier Christy Clark pressed for a greater share of government revenues for the project she said repeatedly that while the final decision is in the federal purview there are about 60 permits the province will have to issue for construction to begin.

"So the province could hold construction in limbo indefinitely," Nagata said.

Under provincial legislation, for $50 any registered voter can apply to Elections BC for a petition on their own proposed legislation. If approved, they have 90 days to collect the signatures of 10 per cent of the registered voters in each of the province's 85 ridings.

The petitions are non-binding.

If the chief electoral officer verifies that threshold has been met, a copy of the petition and draft bill are sent to a legislative committee.

The Select Standing Committee on Legislative Initiatives can either table a report recommending introduction of the draft bill or put it to a public vote. If more than half of registered voters cast ballots in support, the government must introduce the bill in the legislature.

But even that is no guarantee of success. The bill proceeds as any other legislation, with MLAs free to vote as they wish.

Since 1995, nine initiative applications have been approved but only one petition gathered the required number of signatures to pass. That campaign resulted in a provincewide vote in favour of repealing the harmonized sales tax.

Bill Tieleman, one of the founders of the Fight HST campaign, wishes the Dogwood organizers luck but said he's not optimistic about their odds of success.

"It's extraordinarily difficult," he said.

Support for the initiative must come from every riding.

Although they set out with 85 per cent of voters opposing the tax, the HST campaign only barely met the threshold in one Abbotsford riding, Tieleman said.

And that was with taxpayers faced daily with the reality of paying the hated tax, he noted.

"They'll make their targets in a lot of Vancouver and Victoria (ridings) but that's not the way it works. It's not a five per cent or ten per cent of all voters. It's every riding," Tieleman said.

"There's a lot more people who support the Enbridge pipeline for job creation and economic reasons than supported the HST."

Nagata said he realizes there is work yet to be done.

But a legal team is working on the draft legislation and there are 450 trained volunteers on the ground across the province. There are 5,500 people who say they will help collect signatures and already 27,000 people who have pledged to sign.

They are aiming for 15 per cent of voters in each riding to ensure success once signatures are verified.

They'll need 320,000 verified signatures spread throughout the 85 ridings and Nagata said an announcement is imminent about labour, environment and community groups that will join the campaign.

Despite the odds, he's confident that if the initiative must go ahead, it will succeed.

"We know from our own polling and our work on the doorsteps that this is an issue that's moved into the mainstream," he said.

"We live in this province. We pay taxes in this province. The idea that a pipeline could be built through our province ... without any democratic input from British Columbia is something that people — regardless of their political affiliations or their education level or their place of residence — agree on." 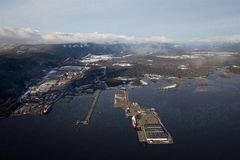 Opinion
Why B.C. must reject the Northern Gateway review
June 12, 2014