The U.S. and Canada are vowing to work with European allies to hold to account those individuals responsible for violence in Ukraine, and are warning that actions will speak louder than words in the face of a "truce" announced by the beleaguered Ukrainian President.

Prime Minister Stephen Harper and U.S. President Barack Obama discussed the situation in Ukraine during a 30-minute conversation Wednesday before a North American leaders summit in Toluca, Mexico. The leaders signalled caution about a "truce" announced earlier by Ukrainian President Viktor Yanukovych, noting in a joint statement after their private meeting that the truce, "if implemented," would be a "welcome step forward."

"[The leaders] agreed they will continue to monitor the situation closely to ensure that actions mirror words," the statement said. Mr. Harper and Mr. Obama also called for the military to show restraint and stay out of issues that should be resolved by civilians.

Earlier in the day, though, the U.S. announced it would extend its travel restrictions to 20 senior members of the Ukrainian government – what it called the "full chain of command" responsible for "human rights abuses related to political oppression in Ukraine."

And late Tuesday, Foreign Affairs Minister John Baird issued a statement saying that all options, including targeted sanctions, are being examined and that Ottawa is working with allies on a "co-ordinated path forward in the coming days." Conservative MP James Bezan, who is of Ukrainian heritage, was more explicit in an interview Wednesday: "We're definitely looking at expanded sanctions, above what we've already done."

Ottawa, which closed its embassy in Kiev on Wednesday amid the unrest, started barring certain Ukrainian officials from entering Canada this past month.

Mr. Harper and Mr. Obama were among a growing chorus of Western leaders who expressed deep concern over this week's bloodshed, with some European leaders saying Wednesday that targeted sanctions are inevitable. The New York Times reported that German Chancellor Angela Merkel, speaking alongside French President François Hollande after a meeting in Paris, was explicit that European sanctions are, indeed, on the way.

She said EU foreign ministers, who are slated to hold an emergency meeting Thursday, have only to decide "which specific sanctions should be applied," according to the Times. Already Wednesday, European diplomats had discussed the logistics of the sanctions, though officials said Mr. Yanukovych would be excluded to keep dialogue channels open.

Before Thursday's much-anticipated EU meeting in Brussels, foreign ministers from France, Germany and Poland will visit Kiev to meet with both sides. Ms. Merkel also said she informed Russian President Vladimir Putin of the Kiev visit and noted the two had agreed "to do everything to avoid an escalation in violence" in Ukraine.

"We have decided to stay in very close contact with Russia," she said.

The crisis in Ukraine began this past fall, after Mr. Yanukovych shunned deeper association with the EU in favour of closer ties with Russia, which had promised a $15-billion bailout for the recession-hit economy.

Also Wednesday, the U.S. expressed concern over the changing of the guard in the Ukrainian military. The U.S. State Department said American officials have typically been able to contact Ukraine's senior security brass, and called it "worrying" that doing so has become "difficult" over the past 24 hours.

"We are concerned by the changing of the guard in the military tonight, and hope that that does not presage a change in policy on the decision to use the military," the State Department official said.

NATO leaders echoed the U.S. in urging Ukraine's armed forces to stay out of the crisis, warning Kiev that its relations with the Western alliance, of which Canada is a member, would suffer if the military steps in. "If the military intervenes against the opposition, Ukraine's ties with NATO will be seriously damaged," NATO Secretary-General Anders Fogh Rasmussen said in a statement.

With reports from Agence France-Presse and Reuters

With reports from AFP and Reuters 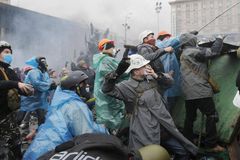 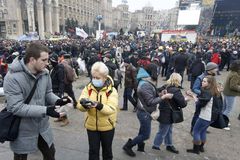 Follow Kim Mackrael and Josh Wingrove, Paul Koring on Twitter @kimmackrael @josh_wingrove @PaulKoring
Report an error Editorial code of conduct
Due to technical reasons, we have temporarily removed commenting from our articles. We hope to have this fixed soon. Thank you for your patience. If you are looking to give feedback on our new site, please send it along to feedback@globeandmail.com. If you want to write a letter to the editor, please forward to letters@globeandmail.com.
Comments