Former child soldier Omar Khadr is in an intensive care unit at an Edmonton hospital following surgery to repair his shoulder, which was severely damaged more than a decade ago during a firefight with U.S. soldiers in Afghanistan.

"It was very serious operation. They have had to take bones out of his legs and out of his hip and muscles out of his back to try and rebuild that shoulder to some extent," Mr. Edney told The Globe and Mail on Monday.

Mr. Khadr, who was born in Canada, has body wounds from his days fighting in Afghanistan where his father, Ahmed Said Khadr, was a top al-Qaeda operative until he was killed in a gunfight with Pakistani troops in 2003.

The younger Mr. Khadr was captured in Afghanistan at the age of 15 in 2002, following a shootout with U.S. troops where he was badly wounded – blinded by shrapnel in one eye and fist-sized exit wounds in his shoulder and chest. He was accused of throwing a grenade that killed U.S. army medic Christopher Speer in the firefight and sent to the U.S. detention facility for captured and suspected terrorists in Guantanamo Bay, Cuba.

"His body is quite a mess in some ways. He is half-blind and his other good eye is partially damaged as well," Mr. Edney said. "It has been quite a journey for him so far. The doctors indicate that his shoulder should have been treated years ago but, of course, there was no treatment in Guantanamo and Canada did not do anything for him to advocate on his behalf."

Mr. Khadr spent more than 10 years in U.S. and Canadian custody, much of that time in the Guantanamo Bay detention centre. Once the youngest detainee in Guantanamo, he was transferred to Canada in 2012 after accepting a plea deal.

Mr. Edney, a tough-talking human rights lawyer who said his client was coerced into fighting by his father, said Mr. Khadr was treated abysmally even though he was a child soldier and his body was shattered from wounds.

"Nobody advocated for his health whatsoever. Even when he came back to Canada, I raised all those issues with the Correctional Services and of course [former prime minister Stephen] Harper was not interested in hearing anything like that," he said.

Mr. Khadr was freed on bail in May, 2015, and released under the supervision of Mr. Edney. He said he would "prove to [Canadians] that I'm a good person."

Mr. Edney has been seeking a formal apology from the United States and from the new Trudeau government for the alleged abuse and neglect of Mr. Khadr while he was in the prison, particularly since he was a child soldier.

"It is one of the arguments I keep making to the Canadian government to apologize for the mistreatment of him," Mr. Edney said.

The Supreme Court of Canada ruled in 2010 that the actions of the Canadian government had violated Mr. Khadr's rights under the Charter rights and deprived him of fundamental principles of justice.

The International Civil Liberties Monitoring Group and Lawyer's Rights Watch Canada have concluded that Canada contravened its obligations under the Conventions against Torture by failing to prevent and investigate what happened to Mr. Khadr in Guantanamo Bay.

As president, Barack Obama tried to close down the facility, but U.S. President Donald Trump has said he wants to continue filling the detention facility with "bad dudes." 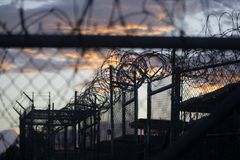