Stephen Harper is going to have to talk to the provinces about energy. And he hates that sort of thing.

In Saturday's Globe, Premier Christy Clark succinctly outlined her key demands before the British Columbia government will support the Northern Gateway pipeline proposal. Most of them are eminently reasonable: The project must clear the National Energy Board review; there must be the most stringent possible controls to prevent and mitigate spills; first nations in B.C. must benefit from the project.

The final demand, however, is the deal-breaker: "B.C. must receive its fair share of the fiscal and economic benefits," from the pipeline. B.C. wants a piece of the action.

Alberta Premier Alison Redford made it abundantly clear at last week's premiers' meeting that Ms. Clark can have all the revenue she wants, so long as not one penny of it comes from Alberta's take.

So it's a standoff, which would be bad enough if the dispute simply concerned the two provinces. But a good chunk of Canada's future economic growth hinges on exporting energy, with increased exports from the oil sands a crucial component of that growth. Enter the Prime Minister – that is, if he's willing to take the cue.

For 45 years, Canadian politics was largely defined as an ongoing series of conflicts between Ottawa and the provinces: over national social programs under Lester B. Pearson; over repatriating the Constitution and Quebec separatism under Pierre Trudeau; over fixing the Constitution under Brian Mulroney; over renewed fears of separation under Jean Chrétien; over funding health care under Mr. Chretien and Paul Martin.

Enough, said Stephen Harper. His strategy as prime minister has been to leave the provinces alone. The best example is the Conservatives' approach to health care. With the current funding formula set to expire in 2014, all 14 capitals were gearing up for months of negotiations. A source says that in the Finance Department, the Prime Minister's Office and the Privy Council Office, advisers pored over the various strategies, every one of which was complicated, cumbersome and politically controversial.

Then someone suggested: Let's just give them the money with a reasonable annual increase, and no strings attached. Mr. Harper seized the proposal. No national standards, no reporting mechanism and, best of all, no first ministers' meeting, in which 13 premiers lock a prime minister in a room and grill him until he gives up the combination to the safe.

The Conservative approach has worked well. Premiers grumble, as they did at least week's Council of the Federation meeting, that Ottawa still doesn't give them enough, but the truth is that federal-provincial relations under the Harper government have been quieter than at any time since the 1950s. What's not to like about that?

Except the pipeline issue involves exactly the sort of protracted negotiations – not to say leadership – that Mr. Harper has sought to avoid in dealing with the provinces. B.C.'s demands for compensation before approving the pipeline are dangerous but understandable. Dangerous, because acknowledging those demands would set the precedent of permitting a province to obstruct a product or piece of infrastructure passing through its jurisdiction unless it's paid a bribe – sorry, properly compensated.

Understandable, because the pipeline proposal confers nothing but benefit on Alberta, and almost nothing but risk on B.C. In essence, the B.C. government is asking for hazard pay.

And no pipeline is going anywhere unless at least some of the first nations who claim the land the pipeline is traversing agree to let it through, which again is a federal responsibility.

If the Conservative government is truly determined to secure access for the Northern Gateway pipeline, then at some point Mr. Harper is going to have to negotiate: with Enbridge, which wants to build the pipeline; with first nations; and with the other first ministers, especially the first ministers of Alberta and British Columbia. If the next premier of British Columbia is NDP Leader Adrian Dix, he will face an even greater challenge.

Not a promising prospect for a prime minister prepared to do almost anything to avoid being locked in a room with a bunch of premiers who really, really want the combination to the safe. 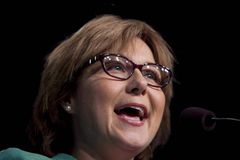 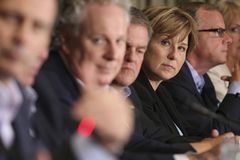