The Wynne government is lifting some of the financial pressure off Ontario's beleaguered health-care system with a budget that promises the largest health-spending boost in five years and free prescription drugs for all children and youth.

The increase to the province's health budget includes a 3.1-per-cent hike to operating funding for hospitals, which falls short of the 4.9-per-cent increase the sector was seeking to alleviate overcrowding and emergency-room waiting times, but counts as a thaw after the province froze hospital budgets in four of the past five years.

The government is vowing to inject an additional $7-billion in new spending into health care over the next three years, plus billions more over the next decade for erecting new hospitals and rebuilding old ones, including five newly announced projects in the Niagara area, Windsor, Hamilton, Mississauga and Northern Ontario.

Finance Minister Charles Sousa touted the increase as a "tremendous infusion of supports for more hospitals, more front-line care, more home care, more support for caregivers," but the opposition dismissed it as failing to meet patients' needs after years of forced austerity in the sector.

"While our hospitals are overcrowded and patients wait for days on stretchers in hallways, the announced hospital funding will barely keep up with the rate of inflation," said Andrea Horwath, Leader of the Ontario NDP.

The centrepiece of the nearly $53.8-billion health budget is a $465-million program that will provide free prescription medicine to everyone 24 and under, regardless of their household income or whether they have access to private health insurance through their parents. It's the first program of its kind in Canada.

There will be no co-pays or deductibles under the program, which takes effect Jan. 1.

The Liberals' promise comes less than a week after Ms. Horwath unveiled her plan to expand public funding to cover a list of 125 "essential" medicines for everyone, and after Health Minister Eric Hoskins spent years lobbying for a national pharmacare strategy to no avail.

Mr. Sousa said he hopes Ontario's move will spur the federal government and other provinces to work toward establishing a national pharmacare program. In the meantime, Mr. Sousa said, the Liberals decided that covering all young people was a good place to start.

Right now, the province's public drug plans cover 2.3 million seniors, and about 900,000 people on social assistance. The new program, which the Liberals have dubbed OHIP-plus, would expand public coverage to another four million people.

Patrick Brown, the leader of the Progressive Conservatives, questioned whether paying for drugs for children whose parents are wealthy or already have private insurance is the best use of scare health-care resources.

"Under this plan, [those] precious funds would go to pay for millionaire kids," he said. "That doesn't seem right."

Public drug spending is expected to grow by 8.4 per cent this year, more than any other part of the health budget. That increase is not driven primarily by the expansion of pharmacare to young people because the program does not kick in until the last three months of the fiscal year.

Nav Persaud, a physician-scientist at St. Michael's Hospital in Toronto, said that research has shown the cost of medications continues to prevent plenty of uninsured Canadians from filling their prescriptions.

"Even small co-payments and deductibles deter people from appropriately using medication, and it's more likely for families with a lower income. But it's still true for families with moderate incomes," Dr. Persaud said.

The Liberals are also promising universal coverage for Mifegymiso, better known as the abortion pill.

Overall health spending is projected to grow by 3.3 per cent this year, about a percentage point more than the average annual increases in the lean years between 2011 and 2016.

However, this year's increase is still well below the amount health-care costs are expected to grow.

The Financial Accountability Office of Ontario, which published a sobering report on the province's health-funding challenges in January, says inflation, population growth and population aging will drive health-sector expenses to grow by 5.3 per cent a year until 2020.

Ontario's long-term care homes are slated to receive a 2-per-cent increase in operating funding, plus more for fresh meals, but there is no plan to add new nursing home beds.

The Ontario Hospital Association, which represents 145 hospitals, said before the budget was unveiled that base funding increases of zero in four of the past five years had pushed hospitals to brink.

"Hospitals were truly at a turning point," said Anthony Dale, the president of the Ontario Hospital Association.

A surge in patients during flu season this winter exposed the underlying crowding problem, forcing hospitals to treat more patients than usual in hallways and other unconventional spaces.

The 3.1-per-cent increase works out to an additional $518-million for hospitals this year. "It's going to help maintain system stability and help strengthen access at a very, very critical time," Mr. Dale said.

Ontario has the fewest hospital beds per capita and shortest lengths of stay in the country. Only Quebec spends less per capita on health care. 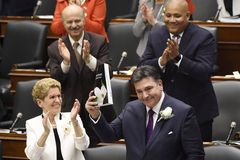 Ontario bets strong economy will keep budget balanced
April 27, 2017
Ontario moves to toughen oversight of syndicated mortgage investments
April 27, 2017
Follow Kelly Grant on Twitter @kellygrant1
Report an error Editorial code of conduct
Due to technical reasons, we have temporarily removed commenting from our articles. We hope to have this fixed soon. Thank you for your patience. If you are looking to give feedback on our new site, please send it along to feedback@globeandmail.com. If you want to write a letter to the editor, please forward to letters@globeandmail.com.
Comments