Ontario's deficit is on the rise for the second year in a row, casting further doubt on the Liberal government's ability to hit its target of balancing the books by 2017-18.

Sources within the government say the shortfall that will be revealed in Thursday's budget will be higher than last year's $11.3-billion, significantly more than the $10.1-billion deficit that the government had previously forecast for this year.

Premier Kathleen Wynne's Liberals have balked in recent months at making further deep cuts to spending, and are instead preparing a budget with a slew of new spending on infrastructure – ranging from highways to subways – and social programs, including help for people with developmental disabilities and a wage hike for child-care workers.

Liberals insiders contend the spending is necessary to stimulate the province's fragile economy. The document, they say, is also partly designed to be difficult for the left-leaning New Democrats to vote against and partly to be a saleable platform in the event of a snap election.

Officials, speaking on condition of anonymity, said final revenue figures from previous fiscal years have also come in lower than expected. Since the books from those years are closed, the government has no choice but to put the weaker numbers on this year's ledgers, adding to the hit to the province's bottom line. The Liberals are also putting the blame partly on the federal government for not protecting Ontario against a drop in transfer payments.

Finance Minister Charles Sousa has been hinting since last fall that he would miss interim targets in the government's deficit-reduction plan, which this year required a reduced shortfall of $10.1-billion. But he has insisted he can still meet the ultimate goal of balancing the budget by 2017-18. Mr. Sousa is relying more heavily on economic growth – driven in part by massive spending – to reach balance.

The growing deficit is in part a function of Ms. Wynne's unwillingness to continue with the tougher austerity measures of her predecessor. Dalton McGuinty's actions, which included imposing a wage freeze on teachers, allowed the province to drive the shortfall below $10-billion in his final year in office. But they also caused parts of the Grits' electoral base to turn against them.

As early as February, 2013, civil servants told Ms. Wynne that to meet deficit-reduction targets – which were set out by Mr. McGuinty's finance minister, Dwight Duncan – she would have to make even deeper cuts than Mr. Duncan himself had attempted, or hike taxes. For instance, the province would have to cut health spending by a hefty 5 per cent once population growth and inflation are factored in.

"The Ontario plan to balance … is the longest and most likely stringent in Canada," top civil servant Peter Wallace wrote early last year in a briefing note, which was disclosed last month to a legislative committee. "No other Canadian jurisdiction, over their anticipated time-frame to balance, projects a decline in real per capita program expense of this magnitude."

He has also had some success on the cost-control front: last year's deficit was originally projected to be $11.7-billion, but was reduced by $400-million through the year, which he credited to lower-than-expected program spending.

This year's larger shortfall is certain to provide grist for the Progressive Conservatives, who frequently accuse the government of profligate spending and have signalled they will vote against the budget.

The Liberals, however, have calculated that they would fare better in a possible election by emphasizing new spending than austerity, one insider said. The move also meshes with the Grits' electoral strategy of attempting to take votes and seats from the New Democrats.

The Grits control only a minority of seats in the legislature, and need the NDP's support to pass the budget and avoid an early trip to the polls.

Ontario has posted a deficit every fiscal period for the past five years, according to data released by Ontario's Ministry of Finance. The province went from a budget deficit of $19.3-billion in 2009-10 to $11.3-billion in 2013-14.

Sources within the government said Monday that another shortfall will be announced with the budget later this week. The shortfall is expected to be significantly more than the $10.1-billion deficit that was previously forecast for this year. 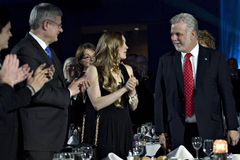 Wynne can’t have it both ways with McGuinty’s record
April 22, 2014 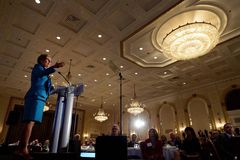 Opinion
A finance minister’s life is always in deficit
April 10, 2014