Ontario NDP Leader Andrea Horwath will sit down with Premier Kathleen Wynne for the first time in more than two months on Wednesday, amid signs that the New Democrats are bleeding support as they deliberate over whether to force an election this spring.

Ms. Horwath made what she said was the last of her requests for changes to the provincial budget on Tuesday, calling for the governing Liberals to backtrack on their commitment to begin implementing high-occupancy toll lanes. She again refused to clarify what precisely will decide whether the New Democrats will keep the government alive, repeating that she will not draw "lines in the sand."

Liberals expressed more frustration than previously with the NDP piling new demands – which also include the appointment of a new financial accountability watchdog and an expansion of the provincial ombudsman's jurisdiction – atop previous ones that were addressed in the budget. "There have been a number of additional requests, which was a little surprising to me because we had worked so hard in the runup to the budget," Ms. Wynne said.

Likely to be of greater concern to Ms. Horwath are polls that show left-of-centre voters moving away from her party, and suggest that many of them would respond poorly if the New Democrats teamed up with the Progressive Conservatives to bring down the government.

A new survey provided to The Globe and Mail by Innovative Research Group, conducted in the week after the budget was tabled on May 2, shows the Liberals holding a lead among decided voters for the first time in nearly a year, with 37-per-cent support. While Tim Hudak's Progressive Conservatives trail with 30 per cent, pollster Greg Lyle said the Liberals' gains came mostly at the expense of the New Democrats, who came in at 25 per cent.

The poll also found that a majority of self-identified New Democrats oppose a spring election, and that half of them described themselves as "satisfied" with the budget as presented.

Another poll, released on Tuesday by Abacus Research, showed the Liberals and Tories tied with 34 per cent. But it, too, indicated a drop in NDP support – from 31 per cent in February to 25 per cent in May – contributing to the Liberals' rebound, despite Ms. Horwath joining Ms. Wynne in higher personal favourability scores than PC Leader Tim Hudak. And it found that only 29 per cent of NDP voters want an election over the budget, next to 43 per cent who oppose one. (The remainder were unsure.)

Since winning the Liberal leadership in January, Ms. Wynne has attempted to bring what she calls "balance" to the rigid austerity agenda adopted during former premier Dalton McGuinty's third term. She made peace with the province's teachers' unions shortly after winning the Liberal leadership in late January, and subsequently exceeded modest NDP budget demands for new spending on social assistance, home care and youth employment. She has also made an expansion of public transit, through the use of new revenue streams, one of her top priorities.

Combined with a more conciliatory tone than that of her predecessor, those policies seem to be appealing to certain constituencies that might otherwise gravitate toward the NDP.

Mr. Lyle's poll, which surveyed 610 Ontarians, breaks down voters into several "clusters" aimed at reflecting voters' values. Likely owing to Ms. Horwath's focus on pocketbook issues such as auto insurance premiums, the NDP leads among those identified as "besieged moderates." But the Liberals are ahead among those described as "core left," as well as more moderate "left Liberals" and "new labour."

Such findings are likely to cause particular consternation among the New Democrats' handful of downtown Toronto MPPs, whose ridings tend to have less inclination toward the sort of populism Ms. Horwath has recently favoured. While Innovative Research did not break down support by region, the Abacus poll (which surveyed 1,185 Ontarians between May 7 and 9) showed the Liberals with 43 per cent among Torontonians next to the NDP's 27 per cent – helping explain why those MPPs are, according to sources, among the least election-hungry members of Ms. Horwath's caucus.

Although Ms. Horwath has scheduled a press conference immediately following her meeting with Ms. Wynne, it is unclear if she will offer any further indication on Wednesday of her party's plans. However, the new public-opinion information is likely to add to existing pressure from organized labour and other allies to allow the government to survive at least until fall.

Horwath’s change in tone presents a confusing image
May 10, 2013 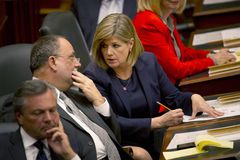 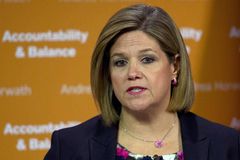 Ontario NDP to negotiate with Premier for budget deal this week
May 13, 2013 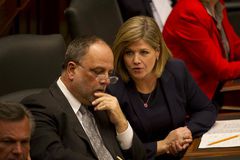