The Ontario NDP's Andrea Horwath is taking aim at the Liberals' musings about selling off pieces of provincial Crown corporations, as the leader seeks to shore up support in her party ahead of a provincial council meeting and upcoming leadership review.

On Wednesday, Ms. Horwath said public agencies should remain completely owned by the government and their major assets, such as power stations and nuclear reactors, should not be sold to private companies.

"We should keep OPG [Ontario Power Generation], Hydro One and the LCBO in public hands where they can benefit all of us, not just the well-connected," Ms. Horwath said at Queen's Park. "The fact is when Ontarians own something, we can make sure that it works for us, that it works in our best interests."

The governing Liberals have appointed Ed Clark, chief executive officer of the TD Bank, to lead a panel to look at the province's assets and make suggestions on what can be sold. The government has not ruled anything out, including selling stakes in Crown corporations to pension funds, or offloading hydro infrastructure to the private sector.

The Liberals contend that they can find more money in the corporations to help fund highways and public transit.

"Andrea Horwath is being irresponsible by saying the government should never review assets, and that it should never look at maximizing the benefit for the people of Ontario," Infrastructure Minister Brad Duguid said in a statement. "We're not going to make that mistake."

The NDP argues that offering any stake to the private sector would diminish the dividends some of these Crown corporations pay annually into the public purse.

Ms. Horwath came under fire from within her party for running on a populist platform in the June election and avoiding the sort of ambitious, social justice-oriented policies the NDP has traditionally embraced. Dissent has been strongest in Toronto, where the party lost three seats to the Liberals, who campaigned on public transit and a provincial pension plan.

On Wednesday, Ms. Horwath said she understood that anger and would make a concerted effort to emphasize the kinds of issues that would appeal to Toronto voters, including income inequality, homelessness, public transit and health care. "All of those things are core NDP values and what I need to do is make sure that I'm connecting with folks in Toronto, and I'm ensuring that those values are reflected," she said.

The NDP Leader faces her first test this weekend when the party's provincial council will debate rules that allow the party's leadership to fill unused delegate slots at its November convention – a policy that some fear Ms. Horwath's loyalists could use to get more of their camp into the convention and the leadership vote.

The party has already gone through a small overhaul since the June election. Michael Balagus, a former chief of staff to Manitoba Premier Greg Selinger and former premier Gary Doer, has taken over from Gissel Yanez as Ms. Horwath's top aide. Principal adviser Elliott Anderson is also out the door.

Ms. Horwath has also become increasingly contrite about the NDP's election result. While the party won three seats outside Toronto – in Windsor, Sudbury and Oshawa – it was largely outmanoeuvred in the Greater Toronto Area by Premier Kathleen Wynne's leftist campaign.

While Ms. Horwath has criticized the Liberal talk of asset sales before, it has taken on a new vigour in recent weeks.

The Liberals have said Crown corporations would remain under public control even if stakes were sold off. But Ms. Horwath argues that selling any of it is a "slippery slope" toward privatization. And she criticized the appointment of a bank executive, Mr. Clark, to the asset-sale panel as "asking the fox to guard the henhouse."

She took no position on selling off smaller assets – such as the waterfront land that houses the headquarters of the Liquor Control Board of Ontario – saying she would have to evaluate those on a case-by-case basis. 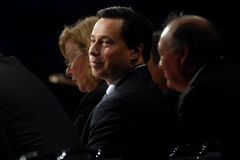 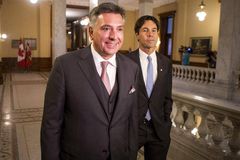 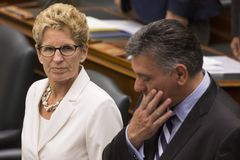