Ontario's Progressive Conservatives are divided on how to select a new leader, through appointment or election, as the party scrambles to recover from the resignation of Patrick Brown just four months before an election amid allegations of sexual misconduct.

Senior party officials and caucus members debated next steps and struggled to gain consensus on Thursday after Mr. Brown was forced to step down. An interim leader is expected to be chosen by caucus members Friday morning, however it has not been decided whether the party will opt for a formal leadership race before the election given the tight timeline, party president Rick Dykstra told The Globe and Mail after a meeting of the party executive Thursday night.

"One of the things that needs to happen before we can fundamentally take next steps is understand who our interim leader is and that's a decision, based on our constitution, that will be made by caucus," he said.

The Globe has learned some Tory MPPs want the interim leader to stay on until the election because they believe it would give the party the best chance to regain its momentum. Before Mr. Brown was toppled, the opposition party was favoured in public polling to win, ending the Liberals' 14-year reign.

However, others within the party, including at least one promising candidate, are arguing it would be undemocratic to not allow members to select their new leader.

While divided privately, the party put on a united face Thursday, with the deputy leaders saying victory was still in their grasp.

"We're so far ahead in terms of planning, in terms of nominations, in terms of fundraising. We have the plan in place to succeed in 2018. Was last night a hiccup? Absolutely. But we're going to move forward," said Sylvia Jones, one of the party's deputy leaders.

Mr. Fedeli was the first to declare his interest in the position. "I've had tremendous support, all through the night and day, I've been hearing from people that it's your time Vic, it's your time to do this. I'll respect the decision of caucus and let my name stand tomorrow," he told reporters in his hometown of North Bay, where he was mayor before his jump into provincial politics. "I think I'm going to be a strong choice."

Mr. Phillips, considered one of the party's star candidates and running in the riding of Ajax, said in a statement that the entire party membership, and not the caucus, has to choose the leader that will guide the party though the election.

"The leader who takes us through the election must have a clear mandate from all members of the Ontario PC Party. Our Party is made up of some 200,000 members across our province. This isn't without its challenges, given the timelines, but it is the right thing to do," he said. Mr. Phillips is the former chair of the Postmedia newspaper chain and the former head of the Ontario Lottery and Gaming Corp.

Mr. Brown has not released any further statements since he was forced to resign at 1:30 a.m. Thursday. He said he would stay on as an MPP in Barrie and defend his reputation.

It took less than four hours for Mr. Brown's leadership to unravel.

Reporters were summoned to Queen's Park for a news conference at 9:45 p.m. Wednesday, just minutes before CTV News aired a report alleging sexual misconduct involving two young women. A visibly upset Mr. Brown vowed he was innocent and would stay on to fight, saying he was made aware only hours earlier by CTV News that the network was ready to report the allegations.

Before Mr. Brown had even left the legislature, his inner circle was disintegrating. Members of his campaign team and senior staff announced they were stepping down because Mr. Brown had rejected their advice that he resign for the sake of the party. As the scandal began to gain international attention, senior party members organized emergency phone calls with caucus members.

During a late-night conference call, everyone, with the exception of Mr. Brown, was unanimous in saying he had to step down, an insider said, explaining he was given an ultimatum: Either caucus issues a statement or you do. The conference call reconvened after a half-hour break, at which point Mr. Brown had prepared a statement, saying he was resigning.

The political shakeup was caused by a report by CTV News about Mr. Brown's interactions with two young girls several years ago. The news agency reported that one girl, a high-school student in Barrie at the time of the incident, alleges that she met Mr. Brown at a local bar with a mutual friend. The future PC leader invited her to his home and provided them with alcohol, though they were underage. During a tour of his home, he stopped in his bedroom with her and then exposed himself and asked her to perform oral sex on him, CTV News reported. She did briefly and then left.

The Globe interviewed the second woman who spoke with CTV. The woman, who met Mr. Brown when she was 18 and he was a federal MP, worked in his office for two summers while she was a university student.

She alleges that during an after-party at Mr. Brown's house in the summer of 2013, when she was 19, and while she was intoxicated and Mr. Brown was sober, he kissed her and climbed on top of her while they were alone in his room.

"I kind of froze for a few minutes, and he laid me down on the bed and was on top of me, kissing me … I remember him pushing himself up against me. I felt his erection there," she said. "What happened with me I think was an abuse of power and I think that for that reason it's important that the public was aware."

She said she was approached by CTV last month, but had previously shared her story with one of the outlet's reporters. She said no one influenced her decision to speak out. The Globe has chosen not to identify the woman. CTV also did not reveal identities.

Premier Kathleen Wynne, at a news conference in her Queen's Park office on Thursday morning, said the allegations against Mr. Brown were shocking. "I think many of us feel very shaken by what we heard last night," she said.

While the Premier would not comment on whether Mr. Brown should resign his seat in the legislature, she said the allegations against the former opposition leader were a sign of Ontario's continuing struggle with issues of sexual harassment. "We all have to be vigilant and we have to shine a light in all parts of our lives to create those safe places that we know are possible, but for whatever reason, we have not been able to create," she said.

NDP Leader Andrea Horwath said any New Democrat facing similar allegations would not serve under her. "If he was in my caucus, he wouldn't be sitting as an MPP any longer," she said. "This is about women coming forward and calling out behaviour that they experienced and I have to say I was pretty disgusted by what I heard in terms of their story."

Mr. Brown was the second Canadian leader to fall this week, after Nova Scotia Progressive Conservative leader Jamie Baillie was asked to resign his post after an investigator found he had breached workplace harassment rules.

Federal Conservative Leader Andrew Scheer addressed the allegations against both men. "We have a zero-tolerance policy on sexual harassment and sexual misconduct in the Conservative Party of Canada." 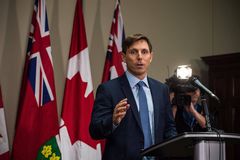 Globe editorial: Patrick Brown can protest his innocence, but he had to go
January 25, 2018 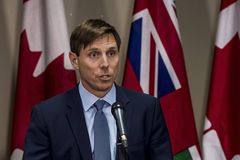 Follow Justin Giovannetti, Karen Howlett and Laura Stone on Twitter @justincgio @kahowlett @l_stone
Report an error Editorial code of conduct
Due to technical reasons, we have temporarily removed commenting from our articles. We hope to have this fixed soon. Thank you for your patience. If you are looking to give feedback on our new site, please send it along to feedback@globeandmail.com. If you want to write a letter to the editor, please forward to letters@globeandmail.com.
Comments are closed