Former Toronto city councillor Doug Ford is jumping into the race to lead the Progressive Conservatives in Ontario just as the party becomes mired in a deepening crisis over the sudden departures of its top two officials.

Rick Dykstra resigned as president of the Ontario PC Party on Sunday night, shortly before Maclean's published allegations that he sexually assaulted a young Conservative staffer in 2014 when he was the MP for St. Catharines. His departure came three days after Patrick Brown stepped down as PC leader hours after the airing of a CTV News report alleging sexual misconduct involving two young women.

Mr. Dykstra was one of the strongest advocates for holding a leadership race to replace Mr. Brown ahead of the coming spring provincial election. With Mr. Dykstra no longer at the helm, some members of the party executive who initially voted in favour of a race before the June 7 election are having second thoughts, according to three senior party insiders. They said the party executive is coming under pressure from grassroots members to hold off until after the election.

Support for what would amount to conducting a leadership race in fewer than 60 days began to waver, the insiders said, following Mr. Dykstra's announcement via Twitter on Sunday night he is "taking a step back for someone else to lead us through the hard work." He has not responded publicly to the allegations.

Interim PC leader Vic Fedeli said on Monday morning he was "shocked and disgusted" to learn about the allegations. "There is no place for this type of alleged behaviour in our party, in politics, or in society as a whole," he said in a statement.

The party executive overruled caucus, however, and opted to hold a leadership race just four months before the provincial election. The vote was tight, with 15 in favour and 10 opposed.

The leadership race has yet to be formally triggered. The Tories took their first steps toward a race by creating a committee that would set the rules for the upcoming contest. Hartley Lefton, a Toronto lawyer who is chair of the 10-member committee, said the party executive asked his group on Friday to come up with a draft set of rules by Wednesday. These rules must then be ratified by the party executive.

"We have clear directions," Mr. Lefton said in an interview. "If the executive wants to change its mind, I guess that's its prerogative," he said, adding he has had no further communication with Mr. Dykstra since Friday evening.

One party member questioned how the Tories can get ready for a leadership race in such a short time while also dealing with the fallout from the departures of Mr. Brown and Mr. Dykstra.

Brian Patterson, who describes himself as a jack-of-all-trades within the party, was asked to sit on the leadership executive organizing committee, but he said he declined. He has been a member of the committee on four previous leadership races.

Not only is he busy with his day job as executive assistant to Toronto City Councillor Christin Carmichael Greb, he said in an interview, he cannot imagine how the party could pull together a leadership race in fewer than 60 days. "We're in a war," he said. And the processes governing a race were "built for peace, not war."

Mr. Ford is not waiting for the party executive to set rules before throwing his hat in the ring. He is seeking to expand his Toronto-area populist support into a provincewide insurgency against the party's establishment.

"I am deeply troubled by what I have seen recently unfolding within the PC Party," he told reporters on Monday in the basement of his mother's Etobicoke home, where he was flanked by family members. "Lifelong supporters of our party have been watching in horror as it falls into complete disarray."

Mr. Ford joins Mr. Fedeli, who has said he also plans to seek the leadership. As interim leader, Mr. Fedeli has moved quickly to distance himself from his predecessor.

His chief of staff, Alykhan Velshi, announced on Sunday several staff departures in the party and in the Office of the Official Opposition Leader. Separately, Mr. Velshi, who until last Thursday was Mr. Brown's chief of staff, warned in a memo to staff that anyone who engages in inappropriate behaviour toward a fellow staff member needs to "leave and leave now, because I will redefine the meaning of the word ruthlessness in protecting staff who work for me."

On Monday, Mr. Velshi told The Globe and Mail he heard rumours about the allegations related to Mr. Dykstra hours before Maclean's published its report, but only learned details after reading the story.

He said he left his job as director of issues management in then-prime minister Stephen Harper's office in 2014 and took a leave from his job in the private sector during the latter half of 2015 to volunteer for the federal Conservative election campaign.

"I was never made aware of these allegations during the few weeks I volunteered on the campaign or [was] involved in any discussion about them," Mr. Velshi said in an e-mail to The Globe. 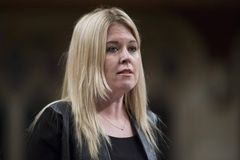