The public battle between the Progressive Conservatives and the provincial police union is escalating, as the PCs are pushing back against recent attack ads and accusing cops of favouring the Liberals.

In a call with reporters Thursday morning, PC candidate Steve Clark questioned why the Ontario Provincial Police Association met with Liberal party officials during the ongoing election campaign. He called on Liberal leader Kathleen Wynne to explain whether the party promised to the OPPA in exchange for support. He also asked if ongoing OPP investigations into the government were discussed.

Ms. Wynne denied she had personally met with the union and said nothing was promised in exchange. She tried to play down the provincial police officers union's support for her party and said the Liberals have only met with them, as they meet with many unions, to understand their concerns when they craft policy.

"We need as a government to understand the issues that people who are providing services in our communities are facing," she said Thursday, following a meeting with Ontario mayors at a hotel near Toronto's Pearson Airport. "How else can we develop good policy if we don't meet with people who are actually delivering services?"

The Ontario Provincial Police Association, however, donated money to the Liberal campaign war chest last year, but did not donate to either of the other two parties. Ms. Wynne said she did not realize the union had been giving her party special treatment. But she contended it was up to the union to decide who they favour.

"There are many associations of employees and professionals who meet with all parties, meet with our government," she said. "This is not an endorsement. That is up to the OPPA and its membership to decide."

In response to the questions, OPPA president Jim Christie released a statement saying he has met with officials from all three parties, and the purpose was only to advocate on behalf of the union's members.

"I want to be crystal clear on this. Any meeting held with Liberal Party officials, or with officials from any party, never involved any ongoing investigations being conducted by the OPP," Mr. Christie wrote.

"Tim Hudak's concerns about the OPP Association securing any promise whatsoever with the Liberal Party of Ontario in return for advertising are baseless and irresponsible."

Last week, the OPPA released attack ads against PC Leader Tim Hudak, saying if he was elected he would rip up police contracts and put their pension plan in jeopardy. The OPPA said the ads were not an endorsement of the NDP or the Liberals, but an "education piece" to let voters know the PC party's plans.

Mr. Hudak has been very clear on his plans to freeze wages for all public sector workers, including police. He joined Mr. Clark in calling the meeting into question as he spoke with media at a technology plant in Ottawa.

The party made the comments the morning after three RCMP officers were killed and two others wounded in a shooting in New Brunswick.

When asked whether it was appropriate to be criticizing the actions of the police union in the wake of deaths in Moncton, Mr. Hudak defended the choice, saying the wage freeze would ensure more money to protect front-line officers.

"The extraordinary tragedy in Moncton reminds us of the incredibly unique job that our police officers do. There is no other job like it. They put their lives on the line," Mr. Hudak said.

"That's why my plan is to make sure we protect our front-line police officers, not only keeping those positions but making sure we can afford the equipment to keep them safe. But the reality is we don't have money for wage and benefit increases."

Ms. Wynne used her Thursday meeting with the mayors to attack Mr. Hudak's plan to cut 100,000 public sector jobs. She said this would entail cutting payments to cities and damaging services.

She also weighed in on the shooting deaths of three RCMP officers in Moncton, offering her condolences to the families of the dead.

"My emotions right now are with the families of the people who have been gunned down in New Brunswick. And to the first responders who are looking for this person: I just pray that they're safe," she said.

NDP Leader Andrea Horwath said the OPPA must discuss its policies surrounding political involvement amongst itself but she said more and more people are speaking out against Mr. Hudak.

"I'm not surprised more and more groups of people, whether that be the OPPA or whether that be others, are coming forward and saying this is not the change that Ontario needs and wants," she said.

She said the OPPA must sort out its own policies surrounding political involvement but she has no problem with the union speaking out on political matters.

"I think it's important that various voices get engaged in the political process," she said, surrounded by members of the Niagara Falls Professional Firefighters Association at a campaign stop in incumbent Cindy Forster's Welland riding. "It's legitimate for organizations and for individuals to engage in the political debate and to talk freely about their concerns as well as their hopes for this province."

She also said she was horrified to learn of what happened in Moncton.

"This is a very, very unsettling situation and my heart certainly goes out to the officers' families involved but also the community," Ms. Horwath said.

Opinion
Hydro imports: When will the bulb go on for Ontario and Quebec?
June 6, 2014 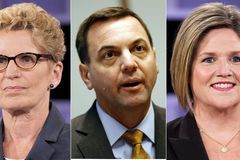 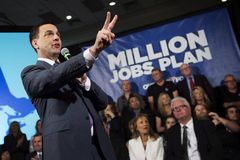 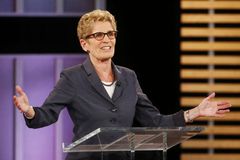 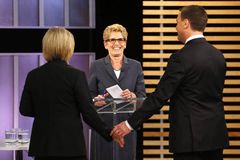 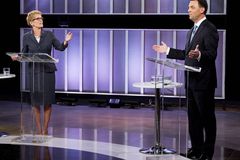