In Kathleen Wynne's Ontario, it is a subject that is no longer verboten.

For the first time since the province fell deep into deficit after the recession that hit five years ago, tax increases are being seriously considered as a way of getting back to balance. And with the Premier eschewing the austerity agenda her predecessor, Dalton McGuinty, moved toward during his final year in office, new revenues are starting to seem like a key to getting out of deficit.

And yet to watch Ms. Wynne at the annual Ontario Economic Summit on Friday, the day after her government provided a fall economic statement that effectively punted fiscal decisions to the next provincial budget and beyond, it was obvious she is still struggling with just how much more she can ask her province to pay.

Queried during an on-stage interview by The Globe and Mail editor-in-chief John Stackhouse about her willingness to cut tax credits for businesses, about which the government has recently mused, she acknowledged the importance of making sure "forgone revenue" is "producing the results that we want." But she would commit only to hoping she will have "the metrics to actually decide on those things by the spring budget."

Asked during a subsequent scrum with reporters about raising property taxes – which the economic statement said the province will "review," nearly two years after economist Don Drummond recommended it in his government-commissioned report on public spending – she dodged altogether by reverting to talking points about maintaining programs and services and investing in the economy.

Entirely reasonable cases can be made that the government should move on both fronts, and raise billions of dollars in the process. For a premier facing an $11.7-billion deficit, who pointedly noted on Friday that Ontario spends less per capita than any other province, the appeal of doing so is obvious. But so, too, is the disincentive.

Among the business tax credits, which arguably have outlived their usefulness as compensation for what was once a high corporate rate, the biggest is for small businesses. In a report on "smart taxation" released a week ago, the University of Toronto's Institute for Competitiveness and Prosperity said the credit – which costs about $1.5-billion annually – is a perverse incentive for companies to stay small. But small businesses are an extremely unappealing enemy for any political party – and Ms. Wynne's government is in the midst of further lightening their burden by relieving them of obligations to pay employers' health tax.

Smaller and more narrowly targeted tax credits, such as those for the province's film industry, might be more appealing. But the government is nervous about moving against vocal "stakeholders" mere months before a likely election.

Asking more of homeowners is even more fraught. As Mr. Drummond explained, the fact that the province has provided shelter from the impact of reassessment means that, in real terms, its property-tax revenues have declined. Tying those revenues to inflation, and related tinkering, could bring in as much as an extra billion dollars annually. But with municipalities offering no similar protections on their larger share of property taxes, those on fixed incomes – which is to say, seniors, who vote in large numbers – would be particularly unhappy.

Meanwhile, Ms. Wynne has one very big underlying reason to think twice before raising either business or personal taxes.

After a decade in power, her government has plenty of baggage. In particular, the billion-dollar price tag of the recent gas plants scandal – which has almost nothing to do with the province's deficit fight, but is a striking example of waste – makes it difficult to argue for collecting more.

As Ms. Wynne reminded her audience on Friday, she has already committed to raising unspecified new revenues for transportation infrastructure. She knows her political capital is highly limited, which explains why the economic statement did not use up much of it. And yet, because she finds deep cost-cutting even more unpalatable, she can no longer escape the broader tax conversation altogether.

In her own words: Kathleen Wynne at the Ontario Economic Summit
November 8, 2013 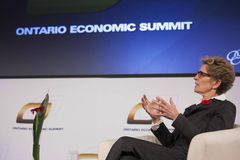 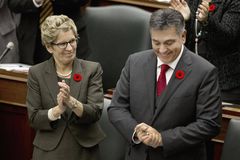 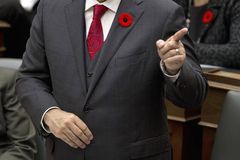 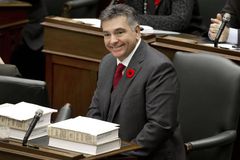 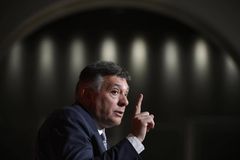 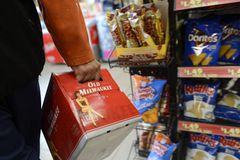