Miriam Ali operates a daycare centre in Mississauga that caters to the children of new Canadians from Asia, Africa and the Caribbean. The parents of these children are angry about Ontario's new sexual education curriculum, and they hold Justin Trudeau partly to blame.

This makes no sense. But it is all part of the Battle for Ontario in the next federal election, in which Premier Kathleen Wynne will be a key combatant, whether she wants to be or not.

A suburban city of 703,000 that spreads west of Toronto, Mississauga has a population that is 53 per cent foreign born. Its six swing federal ridings usually reflect, and help determine, the outcome of elections. So if voters in Mississauga are upset with Mr. Trudeau over an issue, even one outside federal jurisdiction, this matters.

The new sex-ed curriculum put forward by the provincial government "corrupts the morals of our children," Ms. Ali said in an interview. "Our parents are very concerned about this. Sexual education should be taught by parents."

Parents associate Mr. Trudeau with the program "just because of the name Liberal," she said. Conversely, the Conservative Party "has always come across as pro family values."

Of course, sexual education has been on the Ontario curriculum for generations. The new curriculum, which introduces the topic of same-sex marriage in Grade 3 and the dangers of sexting in Grade 7, will be viewed by many parents as appropriate to a tolerant and digitally connected society.

But many immigrant Canadians from India, China, the Philippines and other major source countries are socially more conservative than their third-generation counterparts. And they voted for Stephen Harper's Conservatives in the 2011 federal election.

They also voted for Ms. Wynne's Liberals in the 2014 provincial election. Whether these voters are thinking about Tory tax cuts and family values or Liberal infrastructure programs and help for struggling families will be crucial when they vote in the Oct. 19 federal election.

A senior Conservative strategist, speaking on background, said the party's war room is very aware of the opposition to sex-ed in Mississauga and other suburban cities outside Toronto collectively known as the 905, after their area code.

Without referencing the subject directly, the Conservatives will stress during the election campaign that immigrant values are Conservative values and that Mr. Harper believes parents should be left to do the job of parenting, which is why the government sends child-care cheques directly to homes, rather than subsidizing day-care spaces.

The Tories expect that public support for the Wynne government will wane over the course of the year as Queen's Park struggles to implement an ambitious infrastructure agenda while attempting to balance the budget eventually by reining in health-care and education costs. Conservatives will paint last Thursday's Ontario budget as a tax-and-spend agenda (although, in fact, it is relatively austere), in contrast to last Tuesday's balanced federal budget.

The Trudeau team, many of whom were recruited from Queen's Park, supports Ms. Wynne's agenda, but will keep a friendly distance from their provincial colleagues.

The Liberal economic platform, according to a senior party official, will focus on clawing back Tory tax cuts that benefit upper-income Canadians and redistributing the revenues to voters in lower tax brackets, rather than on huge sums for infrastructure.

As for voters angry at Ms. Wynne's sex-ed curriculum, Mr. Trudeau will simply say, if asked, that the matter is outside federal purview.

Issues at one level of government routinely cross-pollinate, or contaminate, other levels. If immigrant voters in Mississauga and Brampton and Markham and other 905 cities decide that sex-ed is a federal issue, then it's a federal issue, and that's all there is to it.

But regardless of the issue, the Conservatives will seek to yoke Ms. Wynne to Mr. Trudeau at every opportunity in the minds of Ontario voters. The Liberals, in contrast, will count on Ms. Wynne and her activist-government agenda to remain popular among suburban voters who need help with the commute to work, as well as lower taxes.

Whether or not the phrase "Trudeau/Wynne Liberals" works as a political weapon could decide the outcome of the election in the 905. And as the 905 goes, so goes the nation.

Parent group to put kids on strike to protest Ontario sex-ed
May 12, 2018 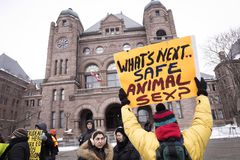 Opinion
Ontario PCs will never govern by fighting the culture wars
May 12, 2018

A coalition? Why Trudeau has more in common with Harper than Mulcair
May 14, 2018