Ontario is slowly losing its appeal for immigrants as newcomers head to more promising regions to make a life for themselves, a trend prompting Ottawa to reduce the funding it gives Canada's most populous province to settle arrivals.

The state of affairs has Ontario's Immigration Minister blaming the Harper government for the problem and warning the that disappearance of the cash will hurt newcomers in his province.

The federal Conservatives say Ontario has no right to demand more money per immigrant than other provinces.

For the third year in a row, Ottawa is chopping the amount of settlement funding it is giving Ontario, which has been plagued by weak economic growth as its manufacturing base struggles to recover from the 2008-2009 recession.

Settlement funding for every other province will rise or remain constant next year.

"We believe it is only fair that settlement allocations across Canada should be based on the share of newcomers that provinces and territories have," Mr. Kenney said.

Ontario's share of new Canadian immigrants has declined to 52 per cent in 2010 from 64 per cent in 2005, as more newcomers chose to settle in Western and Atlantic Canada. Federal officials who provided these figures say the trend has continued in 2011.

But Ontario's Immigration Minister, Charles Sousa, is crying foul over the dwindling dollars, saying Ottawa is short-changing his province.

He points out Ontario remains Canada's No. 1 destination for immigrants.

Mr. Sousa said the latest funding cut will deny Ontario $31-million and leave the deficit-ridden province short of what it needs to help immigrants during weak economic times.

"It will hit newcomers in Ontario especially hard at a time when the province could most benefit from the valuable contributions they bring," the provincial minister said.

"These unfair cuts will deny thousands … access to services that will help them find jobs and learn new skills."

The Ontario minister said Ottawa is to blame for the decline in immigrants, saying the long waits to process applications has become a bottleneck for newcomers trying to settle in his province.

"Thousands of people destined for Ontario are stuck in a huge applications backlog that forces many to wait as much as seven years before they can set foot in our province," Mr. Sousa said.

"This system is not working."

"An immigrant applying under the federal skilled worker program applying today to go to Toronto would be there in under 12 months," Candice Malcolm said.

"The fact is a lot more immigrants are choosing to go west."

"It will always bounce back," he said.

But he added that Ontario could do a better job of wooing skilled workers by building a provincial system that actively recruits and selects the immigrants it needs.

"While other provinces have fully embraced their provincial constitutional responsibility of selecting immigrants … Ontario has effectively abdicated its ability to engage in the immigration dossier in a serious way."

Mr. Kurland said it's logical for Ottawa to finance and promote immigration outside Central Canada as a means of ensuring that newcomers don't simply cluster in major centres such as the Greater Toronto Area.

"If you want to send immigrants to our hinterland and retain them there, it makes common sense to shift resources outside Ontario to places where settlement services are sparse," he said.

"Why pay federally for something that municipalities and provincial services are already doing" in places such as Ontario, Mr. Kurland said.

Why does Jason Kenney need props at committee?
November 24, 2011 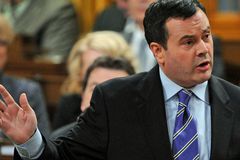