Ontario and Quebec are forging a Central Canadian alliance to co-operate on issues, including potentially expanding electricity trade, hoping their combined clout will bring back prosperity to both provinces.

Ontario's Kathleen Wynne and Quebec's Philippe Couillard announced the new regional partnership in Quebec City on Thursday. It is the first time the rookie Liberal premiers – both leading so-called have-not provinces – have met in person. According to one senior Ontario official, there is "a lot of personal like-mindedness and great rapport between the two."

A bullish Mr. Couillard said the new central Canadian alliance signals the two provinces are "back as a very important block of influence in the country."

"I think by acting together we will be more efficient," he said. "When we have common concerns like infrastructure, like climate change, like energy strategy, it's good that we voice those concerns together … Western provinces do the same, Maritime provinces do the same. It was time that Quebec and Ontario, again, do that."

As have-not provinces, Ontario and Quebec rely on millions of dollars of federal equalization payments as they struggle in the federation economically.

Ontario is under pressure to reinvent itself as the high-productivity manufacturing sector continues to decline and the Liberals struggle to wrestle down a $12.5-billion deficit and record-high debt. Still, Ms. Wynne has taken a go-slow approach, reintroducing the $130-billion budget that provoked the fall of the Liberal minority government. In Quebec, meanwhile, Mr. Couillard has adopted an austerity budget and launched a spending and taxation review aimed at tackling a $2.4-billion deficit and balancing the budget by 2015-16.

On the issue of energy transmission, the premiers say they will "explore the viability of expanding electricity trade between Ontario and Quebec."

Electricity rates are a sore point among Ontarians who have seen them triple over the past 10 years under the Liberal government. Asked if Ontario will buy more energy from Quebec, Ms. Wynne said it "would be a possibility." She said "it has to be a good deal for Ontarians as well," adding that she doesn't know what the details would be yet, "but it is something we should look at."

On infrastructure, the premiers want to see the federal government provide stable and predictable funding – and increase their share of it.

"It is known all over the world that the fastest solution to a job crisis is the construction of infrastructure," Mr. Couillard said.

Ms. Wynne pointed out that the two provinces form the largest economic region in Canada, with a population of more than 20 million.

"A history of partnership shows that when we work together our economy and our people do better in both of our provinces," she said. "I would suggest that it is good for the country for Ontario and Quebec to be working together."

As part of the new alliance, their cabinets will meet jointly in Toronto before the end of the year to flesh out some of the issues raised Thursday – interprovincial trade, climate change, energy supply and infrastructure.

This is the fourth time the cabinets will meet together – a practice started by former premiers Jean Charest and Dalton McGuinty in 2008. Mr. Charest was defeated in 2012 by the separatists under Pauline Marois; Mr. McGuinty stepped down in early 2013.

The forging of the alliance comes just a week before all the premiers will meet at the Council of the Federation meeting in Charlottetown.

The other provinces have already carved out regional alliances – the Maritime and Atlantic premiers meeting regularly to try to push the federal government on issues of concern that they share, such as employment insurance. Western premiers also meet to discuss shared issues.

Where the two premiers differ is in their relationships with Prime Minister Stephen Harper and his government.

Ms. Wynne has had no success with her requests for the federal government to enhance the Canada Pension Plan, and she's accused the Harper government of cutting its social and health transfers to Ontario.

The Prime Minister, meanwhile, criticized her pension scheme, and federal Finance Minister Joe Oliver says she needs to get her province's finances in order because a slumping Ontario will drag down the rest of Canada.

The relationship between Quebec and Ottawa is much friendlier, as the Prime Minister is trying to reboot his Quebec strategy – keeping the new federalist Premier close seems to be part of that.

Mr. Couillard said he has no problem speaking to Mr. Harper – "I can talk to him … we communicate well." He added, however, that he will continue to fight for his province by voicing its concerns and demands. 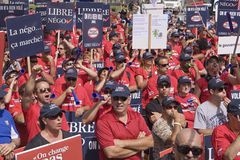