Sophie Grégoire Trudeau is coming under fire for publicly requesting additional staff to fulfill her public duties as the Prime Minister's wife, even as millions of Canadian women struggle to balance their professional and personal lives.

"Statements like that really speak to a disconnect," said NDP MP Niki Ashton. "The focus should be on what Canadian women face on a daily basis and how the federal government can support Canadian women."

Ms. Ashton added that the Trudeau family has access to taxpayer-funded help at home, including two nannies, while millions of Canadians struggle with daycare costs.

Ms. Grégoire Trudeau has one assistant who helps her with her public duties, including co-ordinating her public appearances and going through the correspondence that she receives. Still, she said earlier this week that she can't cope with the current demands on her time.

"I'd like to be everywhere, but I can't," Ms. Grégoire Trudeau said in an interview with Quebec City daily newspaper Le Soleil. "I have three children at home and a husband who is Prime Minister. I need help. I need a team to help me serve people."

The Conservatives said it's up to Prime Minister Justin Trudeau to explain any additional resources that would be provided to his wife, while adding that Laureen Harper fulfilled her duties with only one assistant.

"It is really the hypocrisy of Mr. Trudeau at this point, always wanting more to do self-promotion, to do vanity trips," said Conservative MP Candice Bergen. "That is where a lot of Canadians would question more [staff]."

Ms. Bergen said Ms. Harper was well known for doing "more with less," and said the Liberals should try to do the same.

The Prime Minister's Office said it is aware of the growing needs of Ms. Grégoire Trudeau and is looking at ways to assist her and her sole staffer, Natalie St-Denis. PMO officials currently provide additional assistance, such as accompanying Ms. Grégoire Trudeau to events when Ms. St-Denis can't attend.

However, there is a growing sense the current system cannot be sustained, given the personal popularity of Ms. Grégoire Trudeau, who has garnered international attention alongside Mr. Trudeau.

"Madame Grégoire Trudeau continues to receive an extraordinarily high volume of correspondence and invitations. We are continuing to look at new ways to make sure she is supported at official events she is attending and to make sure correspondence from Canadians across the country and invitations are triaged and answered in a timely manner," said PMO spokesman Olivier Duchesneau.

A precedent was set by Mila Mulroney, who had an office at the Langevin Block, in front of the Parliament Buildings, and at least three staff working with her at one point.

Ms. Grégoire Trudeau has promoted Canadian designers with her fashion choices at public events, but she is also the voice for a number of causes, including promoting the health and self-esteem of young women.

"It's hard to choose, because it's touching when people ask for your help. People really lay out their suffering in some of the letters that I receive. I tell myself: 'I'll try to send a message that will reach as many people as possible,'" Ms. Grégoire Trudeau told Le Soleil.

The Conservatives rejected the assertion by Liberals that Ms. Grégoire Trudeau has to deal with more correspondence and public events than Ms. Harper. 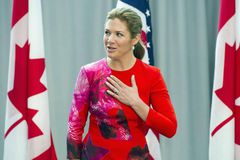 Nathalie Atkinson: Why we should care what Sophie Grégoire-Trudeau is wearing
March 11, 2016 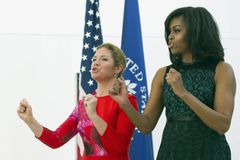