The federal government must pick up the tab for more than $20-million in compensation to survivors of Indian residential schools after its lawyer allowed the Catholic Church to renege on its obligations, according to the former national chief whose advocacy resulted in the largest class-action settlement in Canadian history.

Phil Fontaine, who has spoken publicly about the abuses he suffered as a child at one of the schools, helped to negotiate the Indian Residential Schools Settlement Agreement and says the government must ensure that its terms are met.

"The government is ultimately responsible for meeting all of the financial obligations," Mr. Fontaine told The Globe and Mail on Monday in response to the news that miscommunication by a federal lawyer allowed the Catholic Church to walk away from its promise to try to raise $25-million to pay for healing and reconciliation programs for the survivors.

"I don't know about legally, but there's a moral obligation here," Mr. Fontaine said. "We're dealing with close to 80,000 survivors and it's important for them that they be treated fairly and justly."

The 50 Catholic organizations – known legally as the Catholic entities – that ran many of the schools collected a combined $3.7-million as part of a seven-year campaign in which their lawyer says they made their "best efforts" to raise $25-million as spelled out in the settlement agreement. The entities also had to pay an additional $29-million in cash and to provide $25-million in "in-kind" services – obligations that have been met.

But, as a result of what the federal government describes as a "miscommunication" by one of its lawyers during a court case in which it was trying to get the Catholic entities to live up to the cash portion of their responsibilities, the entities were released last July from any obligation to attempt to raise more funds for the residential school survivors.

Mr. Fontaine said he assisted the Catholics with their dismal efforts at fundraising. "We tried very hard to meet the commitment that the Catholic church entities faced. We were unsuccessful," he said. So Ottawa should "certainly" step in, Mr. Fontaine said.

But the Liberal government does not appear ready to do that.

Carolyn Bennett, the Indigenous Affairs Minister, was in the remote First Nations community of Attawapiskat on Monday and was unavailable for comment. Officials in her office said the government would instead focus its efforts on trying to persuade the Catholic entities that there is a moral imperative to do more.

Yvonne Jones, Ms. Bennett's parliamentary secretary who was asked by the New Democrats about the costly error during Question Period, said the Catholics would be encouraged to do the right thing and to ensure that the terms of the settlement agreement are met.

When asked whether the government should appeal to the Pope, Ms. Jones said: "Whether there is going to be action with regard addressing the Pope or anyone else at this stage, those are decisions that the Minister and the government will take as we move along in the process."

A spokeswoman for the Indigenous Affairs department said in an e-mail that Canada will continue to work with the Catholic Church's representatives to ensure that their remaining obligations under the settlement agreement are fully implemented.

But since a court case last July, the Catholic Church no longer has any remaining obligations.

A judge of the Queen's Bench for Saskatchewan ruled that Alexander Gay, a federal lawyer, led the Catholic entities to believe they could walk away from their fundraising responsibilities if they paid $1.2-million in cash to resolve a case brought by the government to make them pay the full amount of the $29-million in cash that was also part of the settlement agreement.

Ottawa had no intention of releasing the Catholics from their fundraising obligations. But Justice Neil Gabrielson ruled that, because any reasonable bystander to the negotiations between the church entities and the government would have understood that an agreement had been struck, the deal was binding and the Catholics were off the hook.

The officials in Ms. Bennett's office, who pointed out that the error was committed under the previous Conservative government, said the period during which the government could have appealed the decision has expired and there are no other legal remedies.

Senator Murray Sinclair, who chaired the Truth and Reconciliation Commission (TRC) that spent years hearing stories from survivors about abuses they suffered at the institutions, pointed out that one of the commission's calls to action was for the parties to the settlement agreement – the churches and the government – to establish permanent funding for healing and reconciliation. That was to be done once the terms of the settlement agreement had been met, he said.

Mr. Sinclair said it is imperative that government and the churches live up to their commitments under the deal because the United Nations Declaration on the Rights of Indigenous Peoples, which has been endorsed by Canada, says that those who were responsible for the oppression of indigenous culture and language have an obligation to assist the communities and individuals who are negatively affected by those actions.

Regardless of whether the government has released the church from its responsibilities, the need for healing still exists, Mr. Sinclair said. "When two of the defendants make a deal between themselves that ends up in a loss of funding to the survivors, then who really suffers?" he asked.

Edmund Metatawabin, a survivor of the notorious Catholic-run St. Anne's Indian Residential School in Fort Albany, Ont., where children were not only subjected to sexual and physical abuse but were tortured in a makeshift electric chair, said the parties to the settlement agreement must meet their obligations.

"We have many survivors here in Fort Albany that are trying their best, as grandmothers and grandparents, to instill a sense of happiness and pride in their grandchildren and great grandchildren knowing that the perpetrators got away for free," said Mr. Metatawabin, "and that's not very healthy. That's not the law. That's not justice." 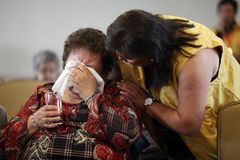