The chief of one of Canada's most impoverished indigenous communities says Prime Minister Justin Trudeau is making concrete commitments to address some of the problems that have afflicted his people for generations.

Chief Bruce Shisheesh of Attawapiskat, who declared a state of emergency on his reserve in April during a spate of youth suicide attempts that has never really abated, said he was satisfied with the outcome of a late-afternoon meeting on Monday that he and elders had with Mr. Trudeau and two of his ministers.

The government has agreed to spend $69-million over three years to improve mental health in remote communities.

"We were surprised and happy with the Prime Minister's announcement of concrete commitment to addressing our youth crisis," Mr. Shisheesh said. "And, second, the Prime Minister clearly committed to fast-track our new lands for Attawapiskat's housing."

Attawapiskat is the most concentrated community in Canada's north – 2,000 residents live on less than 2.23 square kilometres of reserve land, according to the chief, who contends that 1,500 people want to return to the reserve, but have nowhere to go. The Ontario government has offered more land, the chief said, but the federal government would have to agree to the transfer.

Mr. Shisheesh also wants the government to provide better housing, drinkable water and infrastructure, including sewers. He said Mr. Trudeau agreed to talk about ways to solve those problems using some of the $8.4-billion over five years that was committed to indigenous issues in the March budget.

Mr. Shisheesh said he is still worried about Attawapiskat.

"I am still concerned about my community because Attawapiskat has always been in crisis," he said, adding that communication will be the only route to a solution. "I believe that the Prime Minister needs to listen more to First Nations people."

Earlier in the day, Mr. Trudeau met with young people who had been brought to Ottawa by leaders of the Nishnawbe Aski Nation (NAN), which represents 49 First Nations communities in northwestern Ontario, including Attawapiskat.

Chris Lefebvre, a 29-year-old member of the Mattagami First Nation, presented the Prime Minister with a declaration of 19 rights asserted by the indigenous youth of Canada including the right to proper food, decent housing, and good mental and physical health.

"We need to get people into postsecondary and to go to university and colleges and to finish their degrees, so I think that is something that I wanted to make sure that I got across," Mr. Lefevbre said.

"The biggest thing is that we are losing lives," he said. "Everyone knows about the issues in Attawapiskat, and different communities across the country are dealing with the same thing in terms of suicide and mental health issues."

Karla Kakegamic, 26, of the Keewaywin First Nation, said part of the discussion with the Prime Minister focused on the deplorable state of much First Nations' housing. "Nobody should live in those kinds of conditions," she said.

Charlie Angus, the New Democrat who represents the region that includes Attawapiskat, sat in on the young people's meeting with Mr. Trudeau. They talked about the black mould in their homes, the dirty water, the skin rashes they get, the lack of education, and having to leave home at 14 to go to school, he said.

"Today it was positive," Mr. Angus said. "It was the beginning of steps forward. Is it enough? Certainly not. But the fact that the Prime Minister sat down and listened to them, I think, it is a very profound moment for us."

Attawapiskat Chief to meet with Trudeau, press for support in crisis
May 16, 2018 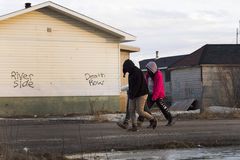 Trudeau to meet Attawapiskat chief, youth in Ottawa
May 16, 2018 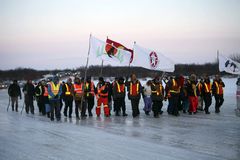