The owners of the private Ambassador Bridge connecting Windsor and Detroit have received Canadian government approval to build a second span between these two cities, a development that raises questions about the future of a separate bridge project championed by Ottawa to prevent congestion at North America's most important trade artery.

The rationale for the Canadian-goverment-backed Gordie Howe International Bridge was that the Windsor-Detroit corridor required more crossing capacity so that trade was not reliant on the existing Ambassador Bridge. The Howe bridge requires the Canadian government to spend billions on infrastructure connecting it to both cities.

Now, however, the Moroun family, owners of the existing Ambassador Bridge, says the regulatory path is clear for them to also build another bridge: a span with six lanes. "We know there are those who never thought our permit would be approved," spokesman Mathew Moroun said.

For subscribers: New Detroit-Windsor bridge may fail to connect

The Canadian government on Wednesday gave no indication it plans to back off the Gordie Howe project despite this news.

"The Gordie Howe International Bridge project is separate and distinct from the plans by the Ambassador Bridge owners to replace their existing bridge," said Heather Grondin, a spokeswoman with the Windsor-Detroit Bridge Authority.

Still, the two bridges together would offer 12 lanes for two-way travel, a significant increase from the four lanes on the Ambassador Bridge today. (The current four-lane Ambassador Bridge is expected to close as part of this redevelopment).

Unless there's a major jump in cross-border traffic, both new bridges will face challenges collecting enough tolls to pay back the cost of construction of two new spans in a timely manner. The Howe bridge will be financed and built by a private contractor while the Canadian government is shouldering the majority of upfront costs – around $4-billion – to build related infrastructure, such as extension roads approaching the bridge on both ends.

All expenditures are supposed to be recouped by tolls, as well as profit for the Howe bridge builder.

Conservative MP Lisa Raitt, who as a former federal transport minister in the Stephen Harper government was responsible for the development of the Gordie Howe Bridge, said she is worried that the latest development could be part of a strategy for the Justin Trudeau government to shutter the publicly backed project. She says the Liberals are running massive budget deficits and are looking for ways to save money.

Ms. Raitt urged Ottawa to press ahead with the Howe bridge, calling it "the most important infrastructure project in the country."

Windsor-area NDP MP Brian Masse questioned why the Trudeau government gave approval for yet another bridge, saying it seems "contrary to good planning."

One person familiar with the Gordie Howe bridge project said it's possible that the Canadian-government-backed project may have an edge over the Moroun plans for a new span because the former is far more advanced in planning. It's possible the Moroun family may face major challenges in financing another new bridge when would-be lenders look at the head start afforded to the Howe bridge, this person said.

The Ambassador Bridge, which opened in 1929, is the only stretch of privately owned road in the Highway 401-Interstate 75 highway link between manufacturers based in southern Ontario and some of their largest customers in the United States. The Windsor-Detroit border crossing is one of the busiest in the world.

It was a bottleneck even before the Canada-U.S. border thickened after the terrorist attacks in September, 2001, but worsened in the years after those attacks.

The construction of a new crossing of the Detroit River was identified 15 years ago by the auto industry in Canada as the key priority for governments to attract new vehicle assembly plants and retain existing factories.

The difficulties auto makers and parts companies had in transporting finished vehicles and components contributed to Canada being bypassed by auto makers when they built new plants in the 2000s and in this decade, senior auto industry executives believe.

Billions of dollars of investment flowed into southern U.S. states and Mexico and several Canadian auto plants were closed.

"I think that the flow [of investment] does have something to do with the logistics," Rob Wildeboer, executive chairman of parts firm Martinrea International Inc., said Wednesday. For foreign companies considering investing in Canada, the fear was not just that vehicles and parts would get held up at the border, but worry about "the potential of getting stuck for a long time," he said.

The existence of the Gordie Howe Bridge and a second span at the Ambassador Bridge should improve the situation considerably, Mr. Wildeboer said, although he noted that the Nexus system that provides a special lane for frequent travellers who register with the two governments has made individual cross-border journeys much easier.

He noted that there are now fewer trucks on the bridge and the highway approaches to it since Toronto stopped shipping garbage to landfill sites in Michigan.

Liberals give go-ahead for construction of Ambassador Bridge replacement
September 6, 2017 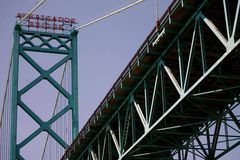 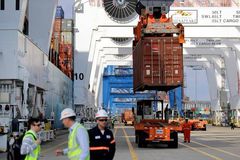