Getting federal funds to organize community celebrations for Canada's 150th anniversary is proving to be a hard task.

New numbers show that the federal government has rejected a majority of the 3,285 applications it has received from artists, community groups and entrepreneurs looking for money for Canada 150 ideas.

The federal funds do not reflect the total cost of the projects, which also require money from sources such as municipal grants and private donations.

With this support, the federal government is hoping to foster a festive atmosphere throughout Canada in 2017, while promoting the country's history, diversity, creativity and innovative spirit.

Read more: Travelling Canada this year? 100 tips to get you from sea to shining sea

Ottawa has budgeted $200-million for Canada 150 celebrations, of which $20-million has been set aside for major events such as the festivities on Parliament Hill in Ottawa. The remaining money will be used to fund "signature" events (larger-scale projects with pan-Canadian reach) and smaller "community" projects.

So far, Ottawa has revealed the identity of the recipients of $113-million in funding, out of $180-million in available funds for these two categories of projects. Other announcements are anticipated in the coming weeks as the official July 1 anniversary approaches.

Heritage Minister Mélanie Joly plays a key role in the Canada 150 celebrations. Last year, she changed the approval process in her department to delegate sole authority to senior civil servants to approve a large majority of grants and contributions to cultural organizations.

However, she kept final control over Canada 150 projects to ensure "an equitable regional distribution" of the funding, a spokesman for the minister said. Still, Ms. Joly lets her bureaucrats handle the initial evaluations and does not see files they have rejected, the spokesman added.

It remains to be seen how closely the government will monitor the projects to ensure that the stated goals and objectives are met in exchange for the funds.

Some projects are already running late, while others are promising large audiences that may be hard to reach. For example, the Great Canadian Flag Project was supposed to be dedicated in February in front of 300,000 people in Windsor according to government records. The event is now planned for May 20.

And an icebreaker ship that is being piloted on a 150-day voyage from Toronto to Victoria via the Northwest Passage received $4.8-million and promises to engage 20 million Canadians on the way, the Students on Ice Foundation website says.

The approved projects come in all shapes and sizes, offering a variety of experiences. Some are centred around websites and apps (such as Passport 2017, which will use a a $1.3-million contribution to help users find Canada 150 events), while others are rooted in older technologies. For example, the Tri-Conic Challenge in Port Alberni, B.C., received $80,000 for a competition in which runners will race against a steam-engine train and bikers will challenge a freighter boat.

Some are quirky, such as the Red Couch Tour, in which a leather sofa will be taken from one end of the country to the other, and Canadians can be photographed sitting on it along the way. The production company behind the tour has received a total of $198,000 in federal funding.

The most expensive projects, coming in at $10.5-million, are a tall ships regatta in Quebec City and a multimedia show named Sesqui that will feature an interactive dome and a 360-degree film touring through Ontario.

The smaller community projects include mosaics and quilts on which individuals will pool their efforts to create large works of art. The cities of Selkirk and Steinbach in Manitoba received $6,000 each for Canada 150 mosaics made up of hundreds of small tiles.

Arts and culture are at the centre of several projects. For $500,000, the government is funding the National Ballet School's Sharing Dance project, which will prepare choreography that is expected to be performed by one million Canadians on June 2.

The Ross Creek Centre for the Arts in Nova Scotia will put on a musical recounting the suffragette movement in Canada with a $50,000 grant. The Prince Edward Island Symphony Society has a $115,000 grant to organize a poetry contest with the winning works being set to music.

The opposition parties have raised concerns that the federal government was favouring projects in Liberal-held ridings in Quebec. The government responded that the accusation was misleading as large amounts of funding in Montreal, for example, will benefit the entire city and surrounding suburbs, and not just one riding.

The government is budgeting an additional $300-million to repair cultural and recreational infrastructure, such as sports arenas, in a program that was advertised as part of Canada 150 funding.

How the government is trying to save the ‘birthplace’ of Canada
February 19, 2017 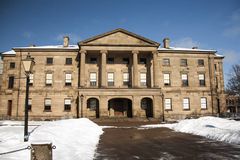 Icebreaker to set sail on Canadian cultural journey for Canada 150
March 12, 2017
Tchotchkes, tote bags and T-shirts: How marketers are selling Canada 150
March 2, 2017
Follow Daniel Leblanc and Chris Hannay on Twitter @danlebla @channay
Report an error Editorial code of conduct
Due to technical reasons, we have temporarily removed commenting from our articles. We hope to have this fixed soon. Thank you for your patience. If you are looking to give feedback on our new site, please send it along to feedback@globeandmail.com. If you want to write a letter to the editor, please forward to letters@globeandmail.com.
Comments