The Liberal government is looking at several "creative" options to bolster the financial viability of aerospace giant Bombardier Inc., with a decision expected before the end of March, federal officials say.

The Montreal-based company is seeking up to $1.3-billion from Ottawa for its troubled C Series aircraft. The Quebec government already pledged $1.3-billion in October to help Bombardier complete the aircraft.

Officials from the Department of Innovation, Science and Economic Development and the Prime Minister's Office are actively examining whether to provide direct investment or credit financing to Bombardier.

"These are all the options under consideration right now. It will move fairly rapidly. If anything happens, it's going to happen this winter," according to a senior federal official, who was not authorized to speak on the record because of the sensitive business and political nature of the discussions.

The government must decide whether to directly invest in the C Series, as the Quebec government did, make a direct investment in Bombardier or provide a line of credit.

One official suggested the government favours credit financing, which would send a strong message to the marketplace without taxpayers having to make an immediate cash infusion. The company would be required to guarantee repayment or give Ottawa a stake in the company.

"The real issue for Bombardier right now is that they need to have the full support of the federal government to boost their confidence in the markets," the official said.

"It has to be done in a way that doesn't cause a trade challenge. We don't want a trade war."

A line of credit – backed by the federal government – would assure leery buyers that "if you place an order in 2016, you will get the plane in 2019 or 2020," the official added.

Jerry Dias, president of Unifor, which represents some Bombardier workers, said he has approached Finance Minister Bill Morneau and Economic Development Minister Navdeep Bains about the urgent need to invest in Bombardier.

In an Oct. 19 briefing note to the incoming government, a Privy Council official described Bombardier as a "key anchor firm for Canada's aerospace industry," and added that governments around the world have to "pay to play" in this increasingly competitive sector.

Prime Minister Justin Trudeau is under heavy pressure to assist Bombardier, particularly from aerospace companies and unions. The aerospace sector represents $29-billion to the Canadian economy and accounts for 180,000 jobs, including 40,000 in the Greater Montreal Area.

"Look at the amount of jobs. The fact of the matter remains that the aerospace industry to the province of Quebec is what the auto industry is to Ontario. They are good-paying jobs," Dave Ritchie, Canadian general vice-president of the International Association of Machinist and Aerospace Workers, said in an interview.

Bombardier has had difficulty expanding the list of orders for its troubled 100-to-160-seat C Series, which some analysts say is stuck between demand for smaller regional jets and the more popular 150-to-180-seat models.

In October, Bombardier failed to convince Europe's Airbus to buy a majority stake in the new mid-sized jet. The C Series has so far received 243 firm orders and represents the company's main hope for generating revenue over the next decade. Thousands of workers in Quebec, Ireland and China will make parts for the aircraft and assemble it. 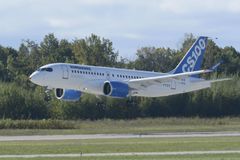