The Conservative government and first nation leaders, in a historic shift from confrontation to co-operation, have agreed to launch a joint effort to transform the schools, economies and quality of life on reserves across Canada.

If the new Canada First Nation Joint Action Plan between the Canadian government and the Assembly of First Nations succeeds, "our people will be able to feel, taste, and experience the change in a significant manner more quickly than we've experienced in the past," AFN National Chief Shawn Atleo said.

"The alternative, the status quo, is brutal."

Ottawa and first nations leaders, who historically have been antagonists more often than partners, will create panels with three major mandates: to put sound education programs in place in native schools, to eliminate obstacles to creating jobs for on-reserve Indians, and to improve the governance of reserves.

They will also continue negotiating land-claim and self-government agreements.

Such unheard-of co-operation between government and native leaders signals a major shift in both leadership and attitudes, Aboriginal and Northern Affairs Minister John Duncan said Wednesday.

"There is a huge generational change" under way within the Indian community, Mr. Duncan said. Where previous negotiations with native leaders focused primarily on treaty rights and self-government, today's leadership "is really heading toward economic development, education and good government in a major way," he said.

The reforms will focus on status Indians living on reserve, as opposed to off-reserve and other aboriginal communities.

The two sides have already been working together for several months on education reform, and Mr. Duncan said recommendations on that front should be ready by October, in time for implementation within the 2012 federal budget. Although funding for the department is protected from the Conservatives' planned spending cuts, there is no indication from the government that additional education funds will be available.

Panels looking at obstacles to economic growth on reserves and ways to improve the quality of band governance will also be given targeted mandates, he said, although the work will be ongoing with less emphasis on deadlines.

Mr. Atleo said co-operating with Ottawa on improving standards on reserves need not come at the expense of asserting native jurisdiction.

"First nations can do both," he said. "We can stand firmly in our rights, but we can also accomplish success in education that will light the fire of potential in our young people."

Nonetheless, overcoming the distrust of the federal government among native leaders will be no easy task, he acknowledged.

"For certain, there's going to be a sense of fear from many about engaging so directly," he said. Yet such engagement represented the best tradition of relations between first nations and the national government, he maintained.

Historically, the relationship between the chiefs and Ottawa has been characterized by grievance and obstruction, with endless negotiations over land claims and self-governance enriching mostly lawyers.

But a combination of factors appears to be shifting the debate in a different direction. One was the apology and compensation offered by the federal government in recognition of the abuses in the residential school system. Another was the Harper government's decision to endorse the United Nations Declaration on the Rights of Indigenous Peoples.

Yet another was the growing conviction by a new generation of chiefs that the first responsibility of native leaders should be to improve the quality of life on reserves.

That improvement is long overdue. In one of her last acts as auditor-general, Sheila Fraser condemned the lack of progress in closing the gap between reserves and other communities. "In fact, it is more than a lack of progress," she observed last month. "The living conditions of the first nations have deteriorated."

Reversing that deterioration will require close co-operation, not only between the federal government and native leaders, but with the provinces as well, Mr. Duncan observed.

Premiers "want to collaborate with us, and we know the provinces are the experts on education," he said.

Any major reforms in education, economic development and governance may require federal legislation, Mr. Duncan said, and could lead to a summit between Prime Minister Stephen Harper and native leaders.

This co-operation is taking place despite the government's determination to pass laws requiring band chiefs and councils to disclose their salaries and expenses. Some native leaders strongly oppose the legislation, claiming they are over-audited by the federal government as it is.

UPDATE On Thursday, a spokeswoman for the department, Michelle Yao, pointed out that all government programs are reviewed on a regular basis to ensure there are efficiencies. 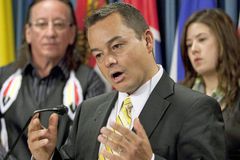 Crees, non-natives cast aside ethnic divide with agreement for future joint government
May 27, 2011
Aboriginal Affairs: A new name with an uncertain meaning
May 18, 2011 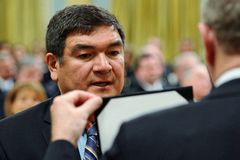 Record number of aboriginal MPs heading to Ottawa
May 9, 2011
National chief to press for first meeting with Harper
May 4, 2011 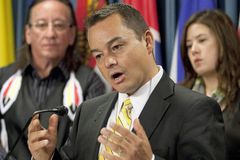