1. Remedial language skills. Premier Danny Williams went back to elementary school recently so he could say, en francais, "Quebec is giving Newfoundland and Labrador the shaft."

He also learned how to say a couple of other choice phrases in French: "Miss, miss," the Premier says, waving his hand impatiently while his seatmate, a little boy, looks quizzically at him. "I've got a question. How, how do you say, 'Quebec is getting away with highway robbery' in French?"

In case you were wondering, this is a joke. Mr. Williams is a guest on CBC's comedy show, 22 Minutes, Tuesday night. But it's not very funny; it's cringe-worthy.

While 22 Minutes is trying to do more political satire - to recapture the glory days when politicians would line up to be on the show and former cast member Rick Mercer would interview prime ministers over burgers and hold raucous pajama parties with female MPs - this skit does not induce laughter.

The premise has potential; it exaggerates and plays up the Premier's combative nature. Mr. Williams is a passionate politician who fights hard for his province and that lands him in scraps with other governments.

His battles with Stephen Harper's federal Conservatives are epic. More recently he's been fighting with and throwing a few insults at Quebec over the issue of electricity transmission. Hence the skit, in which 22 Minutes host Mark Critch advises the Premier he would be more effective if he could deliver his insults in French.

"If you really want to piss off the people of Quebec you've got to say these things in French," Mr. Critch says. Then, he tests the Premier's linguistic ability.

Mr. Williams rhymes off a few French words - "poutine" and "Mario Lemieux" - noting that he learned his French from John Crosbie, the colourful former Conservative cabinet minister, who is now the Lieutenant-Governor of the province and speaks broken French with a pronounced Newfoundland accent.

So the action moves to the classroom, where the Premier is quite disruptive. Not only does he interrupt the teacher but he complains that his crayons aren't as good as the ones other students have. He and Mr. Critch are sent to the office. The skit ends with Mr. Critch, who is angry at the Premier for getting them in trouble. He calls the Premier an "arsehole."

Not all is lost, however. There is a piece with Geri Hall and Nova Scotia MP Peter Stoffer. It's funny. She wants to know why the New Democrat changed his vote to support the long-gun registry. And before he can answer she lists off what she believes are a few of his favourite things: his favourite fish is "flounder," his favourite dance is the "shuffle" and his favourite food are "waffles." She presents him with a pair of "Peter Stoffer flip flops" at the end of the skit.

2. From Ottawa to elected office. Two Tory staffers, Brian MacDonald and Wes McLean, recently quit jobs on Parliament Hill to run for public office. On Monday night they won their races and will soon be sitting in the New Brunswick Legislature.

Mr. MacDonald, a senior policy advisor to Defence Minister Peter MacKay, beat a sitting cabinet minister in his Fredericton riding. Speculation is that he is destined for a cabinet post in David Alward's new Progressive Conservative government. (Mr. Alward soundly defeated Shawn Graham, holding his Liberals to a single term in government.)

Mr. McLean, meanwhile, was a former staffer in the Prime Minister's Office and had worked for the Leader of the Government in the Senate, Marjory LeBreton. He won in the rural riding of Victoria-Tobique, defeating Larry Kennedy, who had been the only surviving member of Frank McKenna's 1987 sweep of the province. Dr. Kennedy had survived the Bernard Lord elections that saw Conservatives rule the province but couldn't survive this one.

New Brunswick voters kick Liberals out over resource control
May 1, 2018 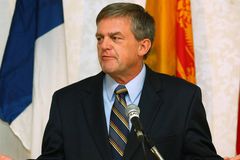 Military gets to work in storm-ravaged eastern Newfoundland
May 2, 2018 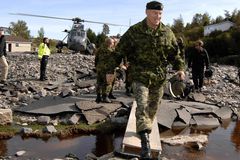 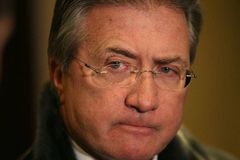