This federal election campaign has turned me into an angry "ethnic" voter and the Conservatives, Liberals and NDP are all to blame.

While all three political parties have pandered to so-called ethnic voters in previous elections, they have never been this brazen. In fact, the callous tactics that have come to typify the 2011 campaign mark a new low for Canadian multiculturalism.

This country has witnessed some of the most appalling acts of ethnic reductionism in recent memory and it is fuelling a backlash from voters.

A YouTube video by an Ontario-based anti-poverty group, the Colour of Poverty, titled " Go Ethnics Go" went viral last week not just because it uses humour to lampoon those unseemly political antics, but because it resonated with just about any Canadian who has a glimmer of common sense.

What's particularly distressing about this election is that politicians gave Canadians plenty of reasons to be angry even before Governor-General David Johnston dropped the writ.

Those missteps might have been overlooked if not for the increasingly distasteful blunders that have characterized this campaign since the official election call.

Last week alone we learned that a Conservative candidate once hosted a televised tribute to the Tamil Tigers, but also of that party's misguided attempt to set up a multicultural photo op for Stephen Harper featuring Canadians wearing " ethnic costumes" as props.

Liberal Leader Michael Ignatieff may have lambasted Mr. Harper for his poor judgment, but then he gave an interview to journalist Sukhminder Singh Hansra, a Sikh known for his extremist views and who once praised a violent attack on Liberal MP Ujjal Dosanjh.

The NDP, meanwhile, has eagerly scolded its political opponents for using such dubious tactics; but, quite frankly, their indignation rings hollow given they too are masters of the "ethnic" photo-op.

More insidious still are the parties' tacit assumptions about so-called ethnic voters: that we vote as a bloc and that our primary concern is to support a candidate who looks like us.

That is exactly what is happening in Brampton-Springdale, one of those "very ethnic" ridings northwest of Toronto. All three parties have candidates of north Indian origin vying for that seat - as if that will maximize their respective odds of winning.

If that is indeed the logic, then the major parties either believe that Punjabi voters in that riding are at best myopic or at worst totally ignorant of national issues. When so many "ethnics" have spent entire lifetimes seeking nothing but parity, it raises the question why this riding can't be treated like any other?

Worse still, all the special attention being showered on the South Asian and East Asian communities only serves to reinforce a "vertical mosaic" - a hierarchy of ethnic groups - that was decried by Canadian sociologist John Porter decades ago.

Any honest discussion of multiculturalism must include an acknowledgement that some Canadians, including those who trace their origins to the Caribbean, Africa or even our diverse aboriginal communities, are routinely ignored because of perverted perceptions of their economic worth.

And that, in a nutshell, is the sad and uncomfortable truth about this election campaign: In the eyes of the major parties, some of us ethnics count more than others. Although most of us abhor that bigotry, we are still being manipulated to think along those lines.

Why else would the party leaders spend so much of their time hobnobbing with Bollywood stars or take great pains to don headgear to offer their Vaisakhi wishes, while looking extremely awkward in the process.

The more political candidates rely on the politics of division, the more they risk alienating voters like me who are fed up of being treated like cultural curiosities.

So political candidates, please note: eating a samosa or tandoori chicken is not going to make me vote for you. Good policies, though, just might.

Rita Trichur is a reporter with The Globe's Report on Business section. 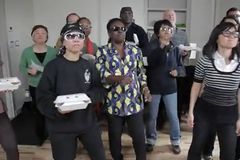