Stephen Harper is working to recast the Canadian identity, undoing 40 years of a Liberal narrative and instead creating a new patriotism viewed through a conservative lens.

Restoring the "royal" prefix to the navy and air force this week is just part of the Prime Minister's attempt at "creating a new frame" for Canada and Canadians.

The Liberals embraced the Charter, the flag, peacekeeping and multiculturalism. Now, the Harper Tories are pursuing symbols and areas ignored by the Grits – the Arctic, the military, national sports and especially the monarchy, according to senior Tories.

For Mr. Harper and his Conservatives, the payoffs could be great: a new pride in the country, an ability to shape the view of new Canadians and, politically, the potential to marginalize the Official Opposition NDP, who could be forced more and more to defend Quebec's interests against all others. Quebeckers are not as supportive of national symbols and the monarchy as is the rest of Canada.

This, some Tories hope, will be a Harper legacy.

"What we're seeing is the emergence of a new patriotism or at the very least a small-c conservative alternative to the established Liberal narrative about Canada," says Patrick Muttart, the former deputy chief of staff to Mr. Harper and key election strategist, who now works for a public strategy firm in Chicago.

Dean Del Mastro, the Parliamentary Secretary to the Prime Minister, says this is about restoring Canada's national identity which has been "lost."

Canada is more, he says, than hockey, "saying 'eh' a lot" and drinking Tim Hortons coffee.

The Harper strategy was set in motion some time ago.

Before the last election campaign, Pierre Poilievre, an Ottawa MP and Mr. Del Mastro's predecessor, was asked to write a section for the Conservative's platform dealing with the theme of "standing on guard for the country" and "renewed patriotism founded in our traditions."

What he came up with, and what the Tories ran on, was the broader theme of "Here for Canada" that "had as a key part of it the restoration, the renewal of our historic memory," Mr. Poilievre told The Globe Friday.

For cost-conscious Tories, Mr. Poilievre notes that this is "one area where you can really affect the country without spending much money."

There are little things the Prime Minister does, too. Next week he travels to the Arctic for his annual visit, reinforcing his government's view of the importance of the North. In October, he is planning to attend the opening hockey game of the returning NHL team, the Winnipeg Jets.

Another piece of the Tory strategy was the release in March of the latest edition of the government's citizenship guide. Chock full of references to the Queen, Canadian history and the military, it is how new Canadians, who have been aggressively courted by the Harper government, learn about what it means to be a citizen.

No surprise that it was directed, in part, by two men, who share the Prime Minister's passion for the monarchy, history and national symbols: Immigration Minister Jason Kenney and his senior adviser, Chris Champion, who last year published the book, The Strange Demise of British Canada: The Liberals and Canadian Nationalism 1964 - 1968.

Canadian historian Jack Granatstein, meanwhile, is miffed by the Harper strategy. He thinks restoring the "royal" prefix is a throwback to colonial times and is rewriting history.

"Nobody was pushing for this," he says. "The idea of rolling back the national symbols to make them more British is just loony. Who does Harper think he's appealing to? The NDP has attacked this move as has the Bloc [Québécois]so maybe he's made his enemies come out.

The real enemy appears to be the NDP. Former Harper mentor and chief of staff Tom Flanagan says the effect of the "royal" restoration is twofold: It plays to the Harper base but it "also discomfits the NDP, with their big Quebec caucus, since the monarchy is less popular in Quebec than elsewhere."

Look for more of the same, says the University of Calgary political science professor, pointing also to the government's plan to add more seats to Ontario, Alberta and British Columbia but not to Quebec.

"If the NDP repeatedly defends Quebec and public-sector unions, against all other considerations, they may solidify their core vote but will cut off their prospects for growth," he says. "It could turn into a Conservative utopia."

In their own words: Flaherty and Carney on stimulus, debt and potential recession
August 19, 2011 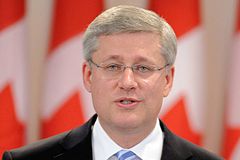 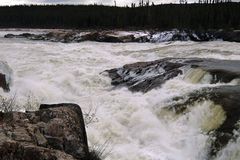 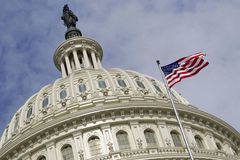