In the end, Danny Williams did it his way, telling his communications staff on the eve of his departure for heart surgery in Miami: "This is my heart. It's my health and it's my choice."

Mr. Williams, the Premier of Newfoundland and Labrador, travelled to Florida this month to have the mitral valve in his heart repaired, choosing a specialized procedure that did not involve having his chest cracked open.

The operation was conducted on Feb. 4 and last Thursday the Premier finally broke his silence, speaking to NTV reporter Fred Hutton about his controversial decision. Mr. Hutton is also the reporter who broke the story that the 60-year-old Premier was leaving the province and the country for undisclosed surgery.

Mr. Hutton spoke to The Globe today about his interview with the Premier, which was conducted in Sarasota, Fla.

He said the Premier looked fit and relaxed, although he was slightly slumped as they were walking and talking. Mr. Williams told Mr. Hutton that his appetite was good and he hadn't lost any weight. It is not clear yet when he will be back at work.

And the Premier addressed with his usual frankness his decision to go to the U.S. instead of having the procedure done in Canada.

"I was warned by my staff that this could be an issue," he told Mr. Hutton. "But from my own perspective I said look, here's our communications plan. It's quite simple. This is my heart. It's my health and it's my choice," he said.

His choice, however, and the secrecy surrounding it, stirred up a huge controversy about the effectiveness of the public health-care system in Canada.

At the time, the Premier refused to disclose what the nature of the operation and why he chose to go to the United States.

Finally, he spoke about his situation. Last year, he was diagnosed with a heart murmur that revealed a problem with his mitral valve. It was considered to be moderately dangerous to his health.

He was told to come back in six months to have it checked. Mr. Williams went back eight and a half months later, when he was told the situation had progressed quickly to severe. His cardiologist said he had to get it looked after immediately.

The specialized surgery he underwent is less invasive and does not require as much recovery time. It is also involves less pain and a lower chance of infection.

The procedure was not offered in Newfoundland but it is available in other parts of the country. The doctor who was recommended to him in Canada would only do the procedure involving have his chest cracked open.

Hoping to avoid that, the Premier called on a fellow Newfoundlander and leading cardiologist in New York, Dr. Lynn McGrath. And he recommended the Premier go to Miami.

In his interview, he told Mr. Hutton that he would have gone anywhere to have the procedure done.

But he dismissed the criticism that ensued - calling it a "bum rap" that because he travelled to the United States he has no faith in the Canadian health care system. And he also knew that Newfoundlanders would "get" that he wanted privacy. In fact, polls show that there are no political consequences to his decision.

He noted that it was Newfoundland doctors who first diagnosed his problem. "If they hadn't discovered it … [I would]have dropped into a heap and that would be the end," he said.

The Premier has also said that he has full faith in the Newfoundland and Labrador health care system, having had major back surgery there.

There is some speculation the Premier will attend the Olympic Winter Games in Vancouver later this week.

The second part of Mr. Hutton's interview will air tomorrow on NTV. In that second segment, Mr. Hutton explores the Premier's future - will he run for a third term? They also talk more about his decision to go to the United States and the ensuing controversy.

Danny Williams and the separatism of the rich
February 16, 2010 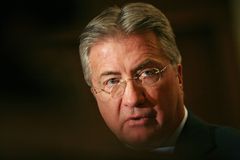