Defence is not a preoccupation of the New Democrats. The party policy-makers spend a lot more time thinking about health care and the environment than equipping the military.

But NDP Leader Jack Layton was in this British Columbia naval town on Friday to assure Canadians that a government led by his party would not cut defence spending - and that the money spent on procurement, especially for ships, would remain here in Canada.

It's a defence plan that is more of a job-creation plan.

"Without question, Stephen Harper's high-risk procurement strategy on the fighter jets places in doubt whether he has the right priorities for Canadian Forces or that he can get the job done," Mr. Layton said at a historic artillery fort.

The Conservative strategy, he said, has led to "unstable employment, lack of capital investment, high-quality, value-added jobs being shipped overseas."

The New Democrats said they would keep defence spending at $21-billion annually, a number set by the Conservatives in the budget that was rejected in the week before the government fell.

One of the most contentious defence issues is the Conservative decision to purchase 65 F-35 stealth fighter jets through a sole-source, untendered contract. The government pegged the cost of those planes at $15-billion, including maintenance over their 20-year lifespan, but some military experts have said it will be many times that amount.

Mr. Layton said it is time to go back to "square one" on the F-35s and none of the aircraft should be purchased without first assessing the defence priorities of Canadians. He said an NDP government would produce a white paper on defence in his first year in office, one that would "refocus" the Canadian Forces on defending Canada and Canadians, assisting in times of disaster and supporting peacekeeping efforts around the world.

And he is more interested in replacing two supply ships than in buying planes.

"We believe there are other priorities right now for the investment in military procurement, particularly these ships that are so vital in peacekeeping missions, in dealing with disasters around the world," said Mr. Layton. "These ships have been identified for replacement for a very long time and the governments have been completely ineffective in getting the job done."

An NDP government, Mr. Layton said, would ensure that contracts for the replacement of needed joint supply ships go to Canadian shipyards.

"For five years, Stephen Harper has failed to procure the joint support ship - ships that our naval forces desperately need, ships that would have kept Canada's shipyards humming," the NDP Leader said.

Mr. Layton rejected the suggestion that he was advocating an outdated role for the military by saying that the Canadians Forces must return to traditional peacekeeping missions.

"It's true that, under the UN arrangements, that a different emphasis has been placed," he said. "But still I think Canadians want to see us playing more of the role of peacemakers and want to see that in higher priority in the modern context. … It reflects expertise that we've developed over many years which has been allowed to atrophy under recent governments."

Mr. Layton is targeting the riding of Esquimalt-Juan de Fuca, where Keith Martin, the long-time Liberal incumbent, is retiring from office. Mr. Martin squeezed out a narrow win in 2008, largely on the basis of his own personal popularity. But this is a Keith Martin riding more than it is a Liberal riding, and the New Democrats who ran third are hoping Liberals voters will drift to them.

The NDP plane then flies to Kamloops, where the party ran second to Conservative Cathy McLeod in the previous election. 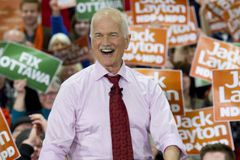 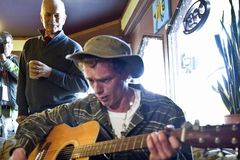 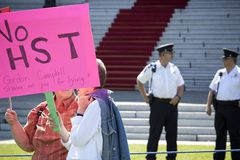