The surge of the New Democratic Party in Quebec appears to be holding strong but a new survey conducted by Nanos Research suggests there has been no similar bump for the NDP in Ontario, where elections are won and lost.

And the strong potential for vote splitting in Quebec between Jack Layton's NDP and the Bloc Québécois could allow the Liberals and the Conservatives to win seats that would otherwise have been out of their reach.

"When people reflect on this campaign, it's going to be about two things," Nik Nanos, president of Nanos Research said Sunday. First of all, "it is about Jack Layton in Quebec, and the other thing is the question of Conservative minority or majority."

To this point, most public opinion surveys show the Conservatives well ahead of the other parties but below the levels they need for a comfortable walk to a majority government.

The Nanos poll, conducted for The Globe and Mail and CTV April 21-23, suggests the Conservatives had the support of 38.6 per cent of decided voters. That is exactly where they started the campaign four weeks ago and about where they were on election day in 2008 when they were returned to power with a minority government.

The Liberals, who had the support of 25.9 per cent of those surveyed, were down just slightly from where Nanos had them pegged on March 15, and about even with their 2008 election results, given the survey's margin of error.

So the only real movement has been for the New Democrats, who had the support of 23.2 per cent of respondents - putting them in a statistical tie with the Liberals - and the Bloc Québécois, who were at a new historical low of 30.3 per cent in Quebec.

But the NDP pickup has primarily been outside of Ontario, where the poll suggests the party is still well behind the Liberals, said Mr. Nanos. And the gains the New Democrats have made in Quebec where they had the support of 26.8 per cent of respondents have "puffed up" their national numbers, he said.

Quebec also had the highest number of undecided voters, which is indicative of volatility, said the pollster.

"There are probably a number of voters in Quebec who have watched what's happened and have started to park into the undecided column," he said. " It doesn't mean that they are necessarily going to move to the New Democrats. It means that they are up for grabs in the last seven days of the campaign."

"The vote-splitting dynamic can create some erratic outcomes depending on what happens at the local level," he said. "This is probably going to be a big headache for anyone in the seat projection business."

The telephone poll of 989 randomly selected Canadians is expected to reflect the broad mood of the country within 3.1 percentage points 19 times in 20. The regional samples have a much greater margin of error. The Quebec sample, for instance, is considered accurate within 6.5 percentage points.

The polling company also asked Canadians what they think of the leadership abilities of the party leaders as measured by their trustworthiness, their competence and their vision for Canada.

While Mr. Layton's scores continue to increase, Liberal Leader Michael Ignatieff has been unable to gain traction and, although he has not moved down much, he is now scoring only half as well as his NDP counterpart.

"Those negative [Conservative]attack ads helped form Canadians' opinions of Michael Ignatieff even before Day One in this election," said Mr. Nanos. "He started off with a disadvantage" and has not been able to overcome it.

Conservative Leader Stephen Harper remains well ahead in the Nanos leadership index. But "we saw a similar trend in the last campaign where Stephen Harper had a great big advantage for most of the campaign but it eroded in the closing seven days," said Mr. Nanos.

The leadership survey of 1,200 Canadians which was conducted between April 21 and 23 is expected to reflect the national opinions within 2.8 percentage points 19 times in 20.

The survey also asked participants which national issue they consider most important and nearly one in three said health care. That compares to the roughly 20 per cent who said they were most concerned about jobs and the economy. All other issues were far down the list.

The Conservatives, who are widely perceived by Canadians to been less strong on health care than the other parties, will have to try to get voters refocussed on jobs and the economy in the close of the campaign," said Mr. Nanos.

"But right now," he said, "health care has such an advantage in terms of the mindshare of voters that people are probably going to be thinking about health care rather than jobs come election day."

Tory majority could hinge on where votes bleed to NDP in final week
April 24, 2011 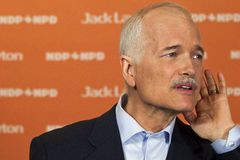