Ted Byfield is hiding out in Raccoon Lodge at Alberta's Sylvan Lake this summer, writing about history rather than making it.

The 83-year-old founder and former editor-in-chief of the now-defunct conservative weekly newsmagazine, Alberta Report, is in the midst of writing about the reign of Queen Victoria, trying to finish Volume 11 of his 12-volume series on the history of Christianity.

Preston Manning, meanwhile, is still busily promoting democratic change through conservative principles as CEO and president of his Calgary-based Manning Centre for Building Democracy. He recently celebrated his 69th birthday.

Twenty-five years ago, Mr. Byfield, a journalist who gave voice to Western Canadian grievances, and Mr. Manning, a would-be politician and son of the famous Alberta premier, found themselves joined by a common view – that Liberal Prime Minister Pierre Trudeau had changed the rules of Confederation with policies that benefited central Canada – and they had to do something about it.

From their early meetings in 1986, the Reform Party was born. And after 25 years, Stephen Harper and his Conservatives finally achieved their dream of majority government.

There is much to celebrate. Next month, Mr. Byfield and Mr. Manning will be honoured for their imagination and tenacity at a reunion of Reformers, former Alberta Report journalists, as well as former and current MPs and pundits, in Edmonton.

It's being billed as an evening about "How the West got in" – a twist on the Reform rallying cry, "The West wants in."

"The reunion is about a lot of things, certainly including the 25th anniversary of the founding of the Reform Party and bringing together old friends and colleagues," says organizer Paul Bunner, a former Harper speechwriter. "But it's also about getting Ted the recognition he deserves for keeping the conservative flame alive during the Liberal dark ages."

Mr. Byfield had some help. Thanks to the Trudeau government, he says, his magazine's circulation jumped from 20,000 to 45,000 a week within a year.

"And we became, as it were, the voice of Alberta ... we had a voice but what was the voice going to do?"

Eventually, Mr. Byfield figured that out, as did Mr. Manning.

"Ted was crusading that the West had to do something, through the editorial pages, pointing out these Western grievances that weren't addressed," Mr. Manning says. "I ended up circulating a memo to Ted [and several other influential players]saying that the West is going to produce another one of these movements ... and this can either be a constructive thing or a destructive thing and shouldn't something be done to shape this in a beneficial direction."

That memo spawned a meeting that finally led to the Western assembly in Vancouver in May, 1987; Mr. Byfield was the keynote speaker and about 800 people attended.

After that, however, he limited his involvement to writing and reporting on the progress of this new Western organization.

"The guy who put the party together was unquestionably Manning," Mr. Byfield says.

"When we kind of got it together we set our unrealistic goal of majority Reform, conservative-oriented government ... by the year 2000," Mr. Manning says. "So we arrived after many twists and turns, 11 years later with 166 [seats]..."

As to what he expects from the reunion, Mr. Manning says it will be a night of nostalgia: "I've got a few stories on Ted that I'll tell. Ted's a real character. He's a colourful son of a gun."

"I can hardly believe it's happening," Mr. Byfield says. "The trouble is I'm 83 and we're still working and my mind still has to focus more on the 19th century than on the 21st."

Where are they now?

Deborah Grey doesn't miss Ottawa or regret her decision to leave politics in 2004. It meant, though, that Canada's first-ever Reform MP – she won her Alberta seat in a by-election in 1989 – was not there for the majority win. "I was part of building the foundation … I am feeling very blessed," she says. The former schoolteacher lives on Vancouver Island now and is on the speakers' circuit. "Part of my message is don't leave it too late to do other things." She says she's seen too many politicians who don't know when to move on. If she can find the time, she hopes to get to the reunion.

Jay Hill will be there. The party builder and long-time B.C. MP, who was one of the original Reform candidates in 1988 before being elected in 1993, called it quits last year. "I have no regrets," he says. "It was the right decision for me at the time." (Stephen Harper now has the distinction of being the only MP to have run for the fledgling party in 1988.) Mr. Hill was a farmer and not even a card-carrying member of a political party when he found himself attracted to the Reform message. It was the Mulroney government's controversial decision to award the CF-18 maintenance contract to Quebec over Winnipeg that pushed Mr. Hill to seek office. The former cabinet minister is now consulting in Calgary. 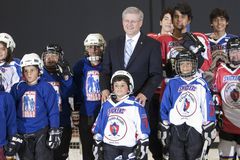