From the moment Jim Flaherty started speaking in a crammed community centre in Ottawa's low-income Vanier neighbourhood, it was clear this was not a routine announcement for the Finance Minister.

In an office that helps francophone families with mental disabilities, Mr. Flaherty began his prepared text. As he slowly read the words in front of him, his thoughts were clearly elsewhere.

He never explained why he fought back tears throughout the news conference, nor why he had to stare at the ceiling for a few moments to regain his composure before taking questions from reporters.

But the topic at hand offers a hint.

He was announcing government consultations on the future of the Registered Disability Savings Plan, a program his government launched in 2007.

The cost of the incentive is quite small to the government, but it helps parents with disabled children save for the day when they can no longer support their child. The program is geared to be more generous for low-income families.

Mr. Flaherty's son John, one of three triplet boys born in 1991, has a mental disability. He contracted encephalitis – a swelling of the brain – from an insect bite as an infant, which led to learning and other health challenges.

The Finance Minister and his son share a love of baseball. Every summer as part of an annual tradition, they travel to the United States to watch the Toronto Blue Jays play an away game, each time in a different stadium.

"John is a big baseball fan, he plays Special Olympics baseball, so this is a big deal for him," Mr. Flaherty said in a 2010 interview that appeared in the Globe and Mail.

Also in 2010, Mr. Flaherty wrote a column about John, called "What Heaven Looks Like," for the Canadian Association of Community Living newsletter.

"Being John's father has changed my perception of what really matters in life," Mr. Flaherty wrote. "The months during his second year of life when John was grievously ill and near death in the hospital were the most desperate time, but a time that I always recall when faced with some crisis or another – all comparisons fail when compared to the desperation of that time. John gave us context about what really matters."

Mr. Flaherty went on to describe a family ride on a submersible at the Great Barrier Reef in Queensland. He said they were "looking out the window at the sun's rays shimmering through the turquoise water on the colourful fish and plants, when John said simply and eloquently, 'That's what heaven looks like.' So now I know."

In between a flurry of international trips and phone calls in the run up to key fall meetings of the G20, Mr. Flaherty's domestic announcements this month have taken on an unusually philosophical tone. Just last week, he was urging university students to work in public service, noting that public life has made him happier than any private sector job ever could.

Mr. Flaherty declined to share what exactly he was thinking Friday as he struggled to get through his announcement.

"Well, I'm just happy that the Prime Minister supported an innovation in Canada," he said. "We were talking this morning before we came in that this is an initiative that other countries in the world are looking at so again Canada has shown leadership on an important subject, as we do on some other issues, and I'm very pleased that it is being copied in other countries." 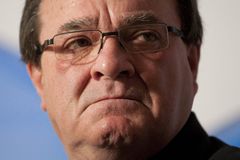 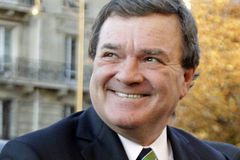