Bruce Carson, a former top aide to Prime Minister Stephen Harper who has been charged with influence peddling, will go to trial next July.

At a hearing in Ontario Provincial Court on Monday, the Crown and a lawyer for Mr. Carson agreed that a five-day hearing would begin on July 22. By electing to have the case heard, Mr. Carson has effectively entered a not-guilty plea, his lawyer told reporters.

The RCMP says Mr. Carson spent eight months lobbying the Department of Aboriginal Affairs on behalf of two affiliated water-purification companies and commissions from those pitches were to go to the woman he planned to marry.

The police allege that Mr. Carson was improperly using his government connections between July 16, 2010 and March 17, 2011, the day after the scandal became public as a result of an investigative report by the Aboriginal Peoples Television Network.

When the APTN confronted the Prime Minister's Office with its findings, Mr. Harper's staff turned the matter over to the police.

Mr. Carson, who was Mr. Harper's chief policy analyst between 2006 and 2009, met in January 2011 with two officials in the office of John Duncan, the minister of Aboriginal Affairs, to discuss the proposal by the H2O Global Group. He is charged with demanding a benefit for Michele McPherson from H2O Water Professionals Incorporated and H2O Global Group Incorporated in exchange for helping the companies do business with the department.

Ms. McPherson, who was then 22, was Mr. Carson's fiancée and a former escort who worked at H2O Water Professionals, also known as H2O Pros. Mr. Carson is alleged to have lobbied the government to promote the Ottawa-based company's water-purification systems for use on aboriginal reserves. In exchange, Ms. McPherson would allegedly have received 20 per cent of all gross revenues from the sales of the units. 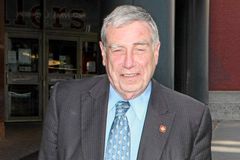