Last August, when one of the cooks on HMCS St. John's had to be airlifted off the frigate after sustaining a head injury, Newmarket-Aurora Conservative MP Lois Brown stepped in and picked up a potato peeler.

It was a stormy day at sea - with three-metre high waves - and Ms. Brown felt sorry for the chef, who had about 1,000 meals to prepare, in addition to the traditional 10 a.m. hot bowl of soup, for the 230 crew on the ship.

"I just said to the captain, 'There is no job too small for me,' " Ms. Brown recalls. "It was a wonderful opportunity to be part of a team on the Navy."

Willowdale Liberal MP Martha Hall Findlay, meanwhile, was shooting an assault rifle from the deck of the St. John's - desperately hoping no sea life was killed during the drill.

Ms. Brown and Ms. Hall Findlay had traded the House of Commons for the frigate last summer as part of the Canadian Forces Parliamentary Program, in which MPs and Senators are embedded for five days with the Army, Navy or Air Force.

The program gives politicians some experience with the military. When it was first started more than a decade ago, research uncovered some shocking statistics - that only eight of the then 301 MPs had any exposure to the Forces.

Typically, about 50 MPs and Senators apply every year to the program, with 20 participating this year.

Based on a similar outreach program in Britain, the Canadian program was initially developed to accommodate 15 politicians - five participants for each branch of the Armed Forces.

"I think it is critical that parliamentarians understand first of all what our military requires and how they respond to these things," says Ms. Brown, who last year joined the Army as part of the program.

"As a parliamentarian I am tasked with two responsibilities - one, to make budget allocations for defence, and two, to make decisions on deployment."

Ms. Hall Findlay joined the Navy, in part, because of her family's military history - her father, Hugh Hall, was part of the D-Day landings and was awarded the Military Cross; her uncle, Don Joy, went on to become the commander of a destroyer out of Victoria.

In addition to the shooting practice, the two MPs participated in other drills, including pirate-ship boarding and fire-fighting in which they were required to wear the full heavy, bulky suit.

On choppy seas, they sailed out from Halifax and slept in a six-person mess on the ship - three stacked bunks on each side.

"One night it was so rough," Ms. Hall Findlay recalls, "we had to tie ourselves in with our bunk seatbelts."

Both women, however, left with only good impressions of Canada's sailors, noting the teamwork on the ship and the sense of professionalism and pride among the crew.

Ms. Hall Findlay says it was "a real eye-opener for me just to learn more about the attitude of the people who are actually involved in our navy.

"I was really impressed."

All this praise costs the military nothing as the program fits MPs into exercises that are already scheduled.

Yet, it is a valuable public-relations tool, especially given the controversial issues the military is dealing with now - the war in Afghanistan and the proposed $16-billion purchase of 65 new stealth fighters.

None of this is lost on Defence Minister Peter MacKay.

"I can tell you that there are few stories more intriguing than hearing MPs returning from their time at sea where they were forced to clean toilets of a frigate," he says.

"MPs get practical insights and personal interaction with our men and women in uniform. Some of the professionalism, discipline and patriotism of our Forces inevitably rubs off on those who participate."

Ms. Hall Findlay, an opposition MP, insists there was no arm-twisting among the crew issues involving procurement or the mission in Afghanistan.

Rather, the discussions she had were "practical" and "thoughtful", dealing with the Navy's future role.

Given the "extraordinary amount of international trade" and the "incredible amount of commerce that is conducted by sea," she says piracy has become a big problem. How the Navy should deal with this, for example, going forward is something she thinks is important.

"I would love to have a real thorough review of Canada's foreign policy," she says, including whether there is an "enhanced role that the Navy can play."

This review, she says, should also include whether the controversial stealth fighter jets are necessary.

She plans to sign up for the Air Force next year. 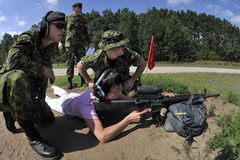 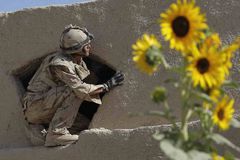