The Conservative government is strengthening the symbolic power of the military in public life by having a member of the Canadian Forces play a prominent role in citizenship ceremonies.

In an operational bulletin issued earlier this year, the Department of Citizenship and Immigration said highlighting the service of members of the armed forces is a way to underline to every new Canadian the rights and responsibilities that come with citizenship.

The bulletin, which describes military service as one of the highest expressions of citizenship, states that members of the military should be seated on the main platform with the citizenship judge, that they can stand in the receiving line congratulating new citizens and that they may give a two- to three-minute speech. Where possible, the bulletin says the preference is for veterans of the war in Afghanistan.

The increased prominence of the military at these ceremonies is in keeping with other gestures made by Stephen Harper's government. The new citizenship handbook, Discover Canada, for example, which was introduced by Minister Jason Kenney in 2009, placed much more emphasis on Canadian military history than the preceding guide.

Michael Fellman, a professor emeritus of history at Simon Fraser University, said it's part of a gradual militarization of Canadian culture under the Conservatives.

"The Tories are in a long-range campaign to change Canadian values and make them more conservative," Prof. Fellman said. "This is a way to show that the military is at the core of the meaning of citizenship.

"It's an attempt to imbue new citizens with awareness of the military, and the military means a whole host of other things, sacrifice for freedom and all that stuff and it rallies people around these very chauvinistic values. It's not the Canada I prefer to think about."

Mr. Kenney's office did not respond to an interview request.

RCMP officers in red serge have for a long time held prominent roles at citizenship ceremonies, so the inclusion of the military is not without parallel.

"What we want to impress upon [the new citizens] much in the same way as the RCMP officer, is that we're here to serve them. We're not here to beat them down. We're not here to cause them fear," Major Saunders said. "That's central to our message, so they understand that when we go on operations it's at the behest of a democratically elected government and they have a hand in who that government is."

Citizenship ceremonies often involve new Canadians from countries with a history of military dictatorship. Sending a message that in Canada the uniform is a symbol that can be trusted is important, Major Saunders said.

In its operational bulletin, the Department of Citizenship and Immigration issued instructions that the military member should be officially recognized during the ceremony and thanked for his or her service and dedication to Canada.

The citizenship judge or presiding official is asked in their opening remarks to say something along the lines of this sample text from the bulletin: "As a Canadian citizen, you live in a democratic country where individual rights and freedoms are respected. Thousands of brave Canadians have fought and died for these rights and freedoms. The commitment to Canada of our men and women in uniform should never be forgotten or go unrecognized. We thank them."

The path to citizenship

The first step towards Canadian citizenship is becoming a permanent resident. Would-be immigrants apply in one of several different categories, such as skilled workers or entrepreneurs, each with different requirements.

Permanent residents can apply to become citizens once they have lived at least three years out of the last four in Canada. Time spent in the country before getting permanent residency counts towards the requirement, but at only half the rate (so, for instance, one year would count for six months' worth of the requirement).

It's somewhat easier for children under 18 to obtain citizenship: at least one parent or guardian, who applies on their behalf, must be a citizen or be themselves seeking citizenship. Children must be permanent residents, but don't have to have lived in Canada as long as an adult who is applying.

People 14 years old or older must attend a citizenship ceremony. 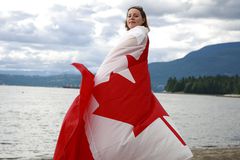 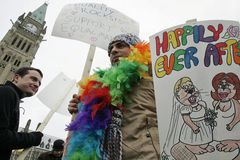 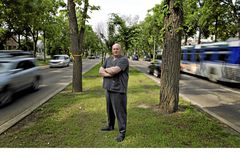 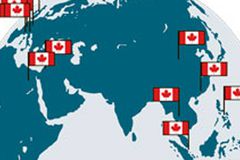 As nation of immigrants, Canada must now confront its emigrants
June 26, 2011

Opinion
The military is a central actor in Canada's story
July 12, 2011 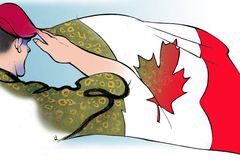