Foreign Minister Stéphane Dion made a big decision earlier this year on whether to allow Canadian-made military goods to be shipped to Thailand, a country ruled by an undemocratic junta since a 2014 coup – but the government won't divulge whether he blocked or approved these exports.

It's only the second time since he took the job in November that Mr. Dion has personally rendered a "ministerial decision" on an export permit. The other was the controversial move in April to green-light export permits for the $15-billion sale of combat vehicles to Saudi Arabia.

Since January, when the Liberals began to face criticism for not cancelling the Saudi deal, Mr. Dion has promised a more "rigorous process" for reviewing arms exports.

On the Thailand decision, the Foreign Minister was asked by senior officials to intervene.

Ottawa issues thousands of export permits each year to allow the shipment of controlled goods – from chemicals to technology to munitions – to foreign countries, many of which are allies. Departmental officials, in practice, handle almost all applications on behalf of the minister. Only about 20 permit applications a year are brought to the foreign affairs minister for a decision.

Mr. Dion's office says he rendered a decision on Thailand earlier this year, but that it cannot tell Canadians whether Ottawa okayed or denied export permits for the shipment of defence and security equipment to Thailand because it would harm the commercial interests of the company, or companies, involved.

Citing the same need for privacy, the Liberal government will also not reveal the shipment in question, only referring to the product as a "military item"– and won't disclose the specific value of the contract.

"The information provided to the government of Canada is commercially confidential. We cannot share further information on this export permit," said Joseph Pickerill, director of communications for Mr. Dion.

The former Harper government allowed exports to Thailand and more than $6-million of goods – likely engines or parts "designed or modified for military use" – were shipped last year.

International watchdogs such as Human Rights Watch say Thailand is facing a "deepening human-rights crisis" since the military took over two years ago and established a regime that has made hundreds of arbitrary arrests, held people in military detention and banned political activity and peaceful public gatherings.

In May of 2014, the Thai army seized power in a coup, and former general and coup leader Prayuth Chan-ocha is head of the military junta and now rules as Prime Minister.

In April, 2016, the United Nations' human-rights chief expressed growing concern about the military's deepening role in Thailand's civilian administration, as well as tight curbs on dissent.

In years past, before the 2014 coup,, Canada shipped goods to the country, including aircraft and aircraft parts for military use, ammunition, bombs and explosive devices, as well as equipment to make munitions.

This April, the Canadian government itself registered public alarm about the erosion of civil rights in Thailand, including expanded policing powers given to the Thai military and the practice of sending regime critics such as journalists, academics and politicians to "attitude adjustment" detention-camp sessions.

"Canada also wishes to reiterate our significant concerns regarding the military government's restrictions on basic civil and political rights, including the Thai government's stated intention to expand its use of attitude adjustment as a means to intimidate political opponents and activists," the embassy of Canada said in an April statement.

Critics say Canadians deserve to be given notice of military exports that are contentious enough they require the minister's personal decision.

"Ottawa's promises of greater rigour and transparency around military export controls do not seem to be reflected in its handling of the Thai and Saudi deals," said Cesar Jaramillo, executive director of Project Ploughshares, a disarmament group that is an agency of the Canadian Council of Churches and tracks arms shipments.

"Ottawa is using an overly broad interpretation of commercial confidentiality as a catch-all ‎excuse to justify the sort of secrecy that has now become routine in regards to Canadian military exports … and once again the public interest in knowing whether Canada's economic well-being is tied to the suppression of human rights elsewhere has been trumped by an overstretched understanding of commercial confidentiality."

Amir Attaran, a University of Ottawa professor who challenged Ottawa's withholding of information during the Harper era, said Canadians have a right to know if the government is allowing military shipments to Thailand.

"What's important is not just routine transparency but the quality of transparency. Concealing military-equipment deals where brutal regimes may be aiming to hurt or kill people is extremely low-quality transparency and shameful," Prof. Attaran said.

In April, Mr. Dion personally approved export permits for the bulk of the deal with Saudi Arabia, a country notorious for human-rights abuses and one where even Global Affairs' internal report warned of worrisome developments in human rights.

Awarding permits is a vital step in sanctioning Canadian military exports and it's the stage in this country's export-control system where Ottawa is supposed to bring its most stringent scrutiny to bear – and consider, for instance, the state of human rights in Thailand. The decision is not supposed to be affected by whether a contract is already signed. It amounts to a judgment call by the Canadian government that there is no reasonable risk the exports will be used to commit human-rights violations.

In the Saudi transaction, details of Mr. Dion's export-permit decision were made public – but only because the government was forced to disclose the relevant documents in response to a Canadian legal challenge of the combat-vehicle deal with Riyadh. University of Montreal professor Daniel Turp had filed a lawsuit challenging Ottawa's decision to allow the transaction.

Mr. Dion's office calls disclosure in the Saudi case an "exception" that was prompted by "the application for judicial review" filed by Prof. Turp. 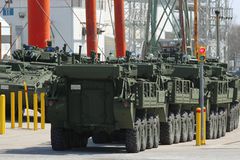