Facing the danger of collapse in global climate negotiations, the host of the talks is making a hard-hitting appeal to the Harper government to abandon its opposition to an extension of the Kyoto Protocol.

A top diplomat from South Africa, host of a crucial round of United Nations climate negotiations this month, is attacking Canada in highly undiplomatic language for its refusal to consider extending the international commitments to reduce greenhouse-gas emissions.

As host, the South African government will preside over the climate negotiations at the seaside city of Durban, beginning on Nov. 28. It has been criticized for failing to act aggressively enough to cobble together a possible climate deal, but lately it has become more energetic, trying to prevent South Africa from becoming notorious as the burial ground for Kyoto.

With Kyoto set to expire at the end of next year, and with key countries such as Canada and the United States still refusing to contemplate any new binding agreement to replace it, South Africa is becoming increasingly desperate as it tries to find a compromise. Part of its new strategy is to target the Harper government, and remind it that Canada was one of Kyoto's earliest supporters when it was negotiated in 1997.

"Are you going to follow the United States, are you also going to become a serial non-ratifier of any agreements?" asked Mohau Pheko, the South African high commissioner to Canada, in an unusually harsh criticism.

"Why take a moral high ground before, on the issue of the environment, and suddenly do an about-turn now?" she asked in an interview with The Globe and Mail.

Despite South Africa's pressure, there is no indication that the Harper government is ready to reconsider its position. In a speech last week, Environment Minister Peter Kent said the government "will not be swayed" from its stand, no matter how "stormy" the climate talks become in Durban.

"However acute the international pressure, we will not agree to taking on a second commitment-period target under the Kyoto Protocol," he said.

UN officials, meanwhile, are beginning to float the idea of a scaled-down agreement to extend Kyoto without the support of key countries such as Canada, the United States, Russia and Japan. There is also a possibility that any agreement at the Durban negotiations might be merely a "declaration of intent" – a political deal, without any legally binding status.

South African President Jacob Zuma says the international community must make a more serious effort to reach agreement on "the legal nature" of future climate-change rules. "The low level of ambition is a serious concern," he complained in a speech to the G20 summit in France this month.

Veteran environmentalist Steven Guilbeault, who has attended most of the UN climate negotiations for the past 15 years, says the Durban talks will be divisive. But he said a "coalition of the willing" from Europe and other regions could sign on to a legally binding deal, even if a few countries such as Canada refuse to join.

"We might as well go ahead with those who are willing, rather than waiting for Stephen Harper or the U.S. Congress to have an epiphany," said Mr. Guilbeault, co-founder of Equiterre, a Montreal-based environmental group.

Bernarditas Muller, chief negotiator for the G77, made it clear that the group of developing nations would oppose any face-saving deal that keeps Kyoto alive in name only. Some nations are trying to "gut" the 1997 treaty by removing its key mechanisms, she said. "Are we just putting the Kyoto Protocol on a respirator so we won't have it die here, so it will die somewhere else instead?" she asked in a speech in Johannesburg.

Ms. Pheko, the South African high commissioner, rejected the idea of voluntary pledges by wealthy industrialized countries. She scoffed at the notion that Canada would be "good boy scouts" if a Durban agreement is not legally binding. Even under Kyoto, with all of its binding rules, countries such as Canada failed to meet their targets, she noted. "So under a voluntary regime, it can only get worse."

With a report from Karim Bardeesy in Toronto

Opinion
The numbers say it all: Canada is a climate-change miscreant
May 9, 2018 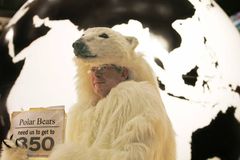 Canada's greenhouse-gas emissions increase
April 30, 2018
Stop whining, Kyoto's here to stay, so learn to love emissions trading
May 2, 2018
Forget Kyoto, let's clean up our air
April 30, 2018
Follow Geoffrey York on Twitter @geoffreyyork
Report an error Editorial code of conduct
Due to technical reasons, we have temporarily removed commenting from our articles. We hope to have this fixed soon. Thank you for your patience. If you are looking to give feedback on our new site, please send it along to feedback@globeandmail.com. If you want to write a letter to the editor, please forward to letters@globeandmail.com.
Comments