An assessment of First Nations health care produced by the federal health department early last year shows the government is aware that it is failing in almost every respect to deliver adequate treatment and medical services to people living on reserves.

The review was conducted for Health Minister Jane Philpott after the Canadian Human Rights Tribunal found the government is discriminating against vulnerable indigenous children on reserves by providing them with less money for welfare than is available elsewhere in Canada. It points to significant gaps for First Nations in primary care, health promotion and prevention, child development, infrastructure, non-insured health benefits and environmental health.

The federal Liberal government, which is responsible for indigenous health care, says it has been investing hundreds of millions of dollars in First Nations health since it came to office a year ago and is working to resolve the problems.

But doctors say little has improved since the Health Canada report was written in February, 2016, and one physician who has been treating indigenous people in Northern Ontario for more than a decade said it is a "very powerful indictment of a current state of affairs."

"Would these sort of things be tolerated in any provincial system?" asked Mike Kirlew, who practices in Sioux Lookout and on reserve. "This is about children dying. This is families lacking basic services."

The Health Canada assessment says at the greatest risk are programs such as those involving home and community care that do not automatically receive annual increases in funding, those that are not universal and those that face health human-resource challenges.

The document, which was obtained by NDP MP Charlie Angus under Access to Information legislation, says First Nations have limited access to health professionals and lack diagnostic equipment in many communities. They must cope with poor infrastructure in nursing stations and health centres, and there are inadequate health records.

Care is not provided outside regular business hours, Health Canada does not pay for palliative care or rehabilitation therapies, a maternal and child health program is not universally available and the shortage of mental-wellness services for children that exists across Canada is amplified on reserves. In addition, the document says, the demand for addiction treatment exceeds the supply, the Aboriginal Head Start on Reserve program for preschoolers is serving just 17 per cent of children who are eligible, and there is an insufficient number of dentists.

"The lack of funding for the maintenance and construction of new infrastructure in First Nations Communities in Canada has resulted in serious deficiencies," it says. And "underfunding" has limited the ability of environmental protection officers to do on-the-ground work such as water-quality testing.

Dr. Philpott said her government remains committed to closing the gaps in health and mental-wellness outcomes that exist between indigenous and non-indigenous peoples in Canada. She pointed out that $8.4-billion was promised in last year's budget to improve the socioeconomic conditions of indigenous peoples and their communities. That included $270-million to replace and renovate nursing stations and health and treatment centres on reserves.

"We recognize that it will require tremendous effort over many years to close these gaps," Dr. Philpott said, "but we remain committed to working with indigenous leaders and the provinces and territories to do so."

But Alika Lafontaine, the team leader of the Indigenous Health Alliance, a collaboration of 150 First Nations across Canada toward health transformation, said the document is further evidence that the system of care provision for indigenous peoples is not only insufficient but ineffective.

The solution, Dr. Lafontaine said, is to create a real health system on reserves – one in which minimum health standards are legislated in the same way that provinces legislate standards within their own jurisdictions. The federal government might not believe that is fiscally feasible, he said, "but then why do we not ask that question about fiscal feasibility when it comes to a remote community in the mainstream health system?" 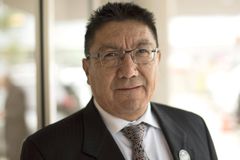 Ex-AFN leader teams with grower to bring medical marijuana to First Nations
December 6, 2016
Follow Gloria Galloway on Twitter @glorgal
Report an error Editorial code of conduct
Due to technical reasons, we have temporarily removed commenting from our articles. We hope to have this fixed soon. Thank you for your patience. If you are looking to give feedback on our new site, please send it along to feedback@globeandmail.com. If you want to write a letter to the editor, please forward to letters@globeandmail.com.
Comments