The Canadian government is intently parsing developments in Saudi Arabia's shifting power structure as Ottawa's controversial $15-billion arms sale rides on stability in a country where new players with sweeping authority over the kingdom's affairs have taken the reins.

The arms deal, brokered by Ottawa, has come under fire because Saudi Arabia has one of the worst human-rights records in the world today.

Diplomatic memos obtained under Access to Information laws demonstrate how closely the federal government is monitoring the Islamic kingdom, which committed to a massive order of armoured fighting vehicles manufactured in London, Ont., when the late King Abdullah sat on the throne.

A sea change has taken place in the Saudi regime since, however, with the advent of a new sovereign in January leading to more transformational alterations in the royal balance of power.

Reports that Canadian diplomats in Riyadh are sending home on the matter include an April, 2015, report called From Saudi Arabia to "Sudairi Arabia" that documents how power in the kingdom is being concentrated in the al-Sudairi clan and that one man, who has "stepped out from relative obscurity," has been handed an unrivalled grip on the country's economic levers.

Many Western governments watch Saudi Arabia carefully because they consider it a force for stability in the Mideast, and Canada is no exception. But Ottawa has a keen interest in ensuring that its strengthening commercial ties with Riyadh are unaffected by dramatic changes in the kingdom of 29 million people.

King Salman, who took power in January, has ensured the line of succession favours his Sudairi clan. In April, he replaced Crown Prince Muqrin bin Abdulaziz with Prince Mohammed bin Naif as the heir to the throne.

And Crown Prince bin Naif in turn appointed Mohammed bin Salman as the deputy crown prince and the heir to the throne after himself.

"Saudi Arabia's power structure is now seemingly set for the next fifty years," wrote Ram Kamineni, currently the first secretary and mission security officer at Canada's embassy in Saudi Arabia in an April 29, 2015, note that was circulated among nearly three dozen senior officials in the Canadian government from the military to Foreign Affairs.

Mr. Kamineni told the Canadian government these new appointments of Sudairi clan members "symbolize the dawn of 'Sudairi Arabia' and the passing of Saudi Arabia … and is so profound a change as to signify a dynastic shift from the House of al-Saud to the family of Sudairi."

He said the Sudairi clan has been quick to insert its own members into key governorships with "other branches of the royal family, such as the bin Abdullahs (children of King Abdullah), bin Faisals (sons of King Faisal) and bin Fahd (sons of King Fahd) … thoroughly marginalized.

"While Western governments come and go with time, Saudi Arabia will see a continuity in leadership, barring some unfortunate incident …"

Deputy crown prince bin Salman, 29, has in a short time become one of the "three pillars of absolute authority in the kingdom," Mr. Kamenini wrote.

More importantly, for Canada, he "has unprecedented control of the Saudi economy and can hopefully force more policy coherence in a system where everything tended to be stove-piped with little intradepartmental consultation," the Canadian diplomat wrote of the new deputy crown prince.

The Harper government, which has made Saudi Arabia a priority market for business, carefully courted the country in the years leading up to 2014, when it announced an unprecedented $15-billion arms sale to Riyadh that was to be brokered by Ottawa.

The government has repeatedly refused to divulge how it justifies the export deal under Ottawa's strict export-control regime. It is by far the largest military export contract Canada has brokered, and federal rules oblige the department of Foreign Affairs to examine whether arms shipments to countries with poor human-rights records would further endanger civilians there. Ottawa will not make public its rationale for allowing the sale of light armoured vehicles or give any details.

Documents obtained under access-to-information laws also show how the government is monitoring human-rights abuses there. An October, 2014, report from a Canadian diplomat in Riyadh detailed how a Saudi court sentenced a prominent cleric, Nimr al-Nimr to death by "beheading with the crucifixion of the body." The Shia cleric had "strongly criticized Saudi Arabia and Bahrain, calling for demonstrations [and] welcomed the overthrow of their respective monarchies."

In an observation that hints at Ottawa's concern for stability in Saudi Arabia, the October, 2014, memo also predicts that were Sheik al-Nimr to be executed, "subsequent protests" in the country's Eastern Province "could be contained by the strong Saudi presence in the region."

As The Globe and Mail has reported, Saudi government documents made public by WikiLeaks, including an April, 2012, memo to former Saudi King Abdullah, detail the Conservative government's push for closer ties with Riyadh.

Several years ago, the Conservatives refocused international relations to make "economic diplomacy" in service of private industry the centrepiece of Canadian foreign policy. In 2009, the taxpayer-financed Canadian Commercial Corporation, a federal agency that has traditionally brokered Canadian arms sales to the United States, began looking to markets such as the Middle East for new business as the U.S. cut defence spending.

The Canadian government memos on the Saudi power structure and Sheik al-Nimr's case were obtained by researcher Ken Rubin. 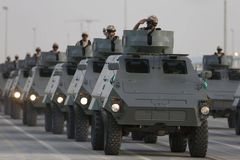 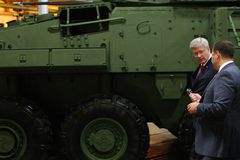