Calls are mounting for the Conservative government to use diplomacy to ratchet down the escalating tensions between Ottawa and the United Arab Emirates.

Now that new visa requirements are about to make Canadian travellers collateral damage in an ongoing war over aviation rights, there are fears that big business may emerge as the next casualty.

The bilateral feud, which has been simmering for years because of Ottawa's refusal to open up more Canadian airports to UAE-based carriers, boiled over a few weeks ago. That was when Canadian Forces soldiers were abruptly sent packing from a military base in Dubai that had long been used to supply the NATO mission in Afghanistan.

Opposition politicians and business groups are urging that cooler heads prevail before more damage is done. "The government has allowed this to get out of hand," said Dan McTeague, a Liberal MP. "It's highly embarrassing."

Even as political relations have soured, business has been brisk. Canada and Dubai do an estimated $1.5-billion in bilateral trade annually. Lawyers, architects, oil experts and other industry leaders have been flocking to the Persian Gulf nation - a gateway to the rest of the Middle East, as well as Africa and Asia. Multinationals, such as Bombardier, are there bidding on lucrative contracts.

Experts say all this trade and travel will be put at risk if relations degrade further. "Some diplomacy is in line," said Gary Ralph, a spokesman for the Canadian Association of Travel Agencies.

Starting next week, visiting Canadian passport holders will need visas to enter the UAE - though citizens of other Western nations will still not need any such travel documents.

UAE-based airlines are facilitating visas for Canadian travellers through online bookings, and a spokeswoman for Emirates Airlines Wednesday e-mailed The Globe and Mail to stress that Canadians are not being charged any price premiums, only standard visa rates - "96-hour visas cost $61.50 and 30-day visas cost $74.50," she said.

Oddly, the UAE embassy in Ottawa has posted on its website that it will be charging exorbitant fees - ranging from $250 for a one-month visa to $1,000 for a six-month visa.

On Wednesday, an official at the embassy said no one was available to speak to these fees. Hardly any Canadians had turned up to ask about them.

Dubai-based Emirates Airlines, and Abu Dhabi-based Etihad Airways remain at the centre of the overarching dispute.

Air travel is big business for the UAE, which has relentlessly lobbied Canadian cabinet ministers to open up Canadian skies. The two airlines each want more than their allotted three weekly flights to Toronto. They want to fly in much bigger jets, to many more places, such as Calgary and Vancouver.

Often these same officials complain they are getting the cold shoulder. The UAE's ambassador to Canada, Mohamed Abdulla al-Ghafli, has even expressed frustration that he can't secure a meeting with Foreign Affairs Minister Lawrence Cannon.

"When you're not actually speaking face-to-face diplomatically, then guess what? Relations don't go well," said NDP foreign affairs critic Paul Dewar. "I think what we're seeing here is chickens coming home to roost." (A spokeswoman for Mr. Cannon pointed out he has met the UAE Foreign Minister five times, even if he has never met the ambassador.)

UAE carriers frequently complain that they are actually the small upstarts whose global ambitions are being squashed by larger forces - specifically the so-called "star alliance" of entrenched European, U.S., and Canadian airlines. The Conservative cabinet has stuck to its position of limited access, saying that thousands of Canadians jobs are at stake. 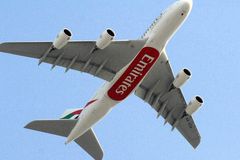 Follow Colin Freeze and Bill Curry on Twitter @colinfreeze @curryb
Report an error Editorial code of conduct
Due to technical reasons, we have temporarily removed commenting from our articles. We hope to have this fixed soon. Thank you for your patience. If you are looking to give feedback on our new site, please send it along to feedback@globeandmail.com. If you want to write a letter to the editor, please forward to letters@globeandmail.com.
Comments