The federal government has promised Queen's Park it will compensate the provinces for extra drug costs as a result of Canada's trade deal with the European Union, and that dairy producers will also be given Ottawa's assistance if they lose sales.

But Ontario has, so far, failed to win federal help for wine and spirit producers who will now face increased competition from their European counterparts.

He said Ontario had successfully pushed Ottawa for help paying for prescription drugs and for compensation for cheese producers and processors.

"We have commitments from the federal government to address the potential negative cost and economic impacts to the dairy, specifically cheese producers, and the potentially serious negative cost impacts on the provinces and territories' [drug] purchases," he said. "Canada, and Ontario specifically, has made tremendous progress in reducing drug costs, so we're concerned those costs will increase as a result of this deal."

Representatives of the provincial governments were at the table with Ottawa and the European Union during talks over some parts of CETA, and Ontario's negotiators pushed for the province's interests, government sources with knowledge of the negotiations said.

CETA will allow pharmaceutical companies to protect their patents on brand-name drugs up to two years longer, meaning cheaper generic copies will not hit the market as quickly. This could drive up Ontario's costs, as the government would be forced to buy pricier brand-name versions of some drugs longer than before.

Since the new system will only apply to new drugs hitting the market, Ontario is unlikely to see higher prices for at least a decade. But Mr. Hoskins said the government is moving now to make sure Ottawa makes up the difference when prices rise.

"They've committed to compensating provinces and territories that see increased cost in regards to purchases of drugs due to the changes," he said. "The potential impact, because it's only in regards to new licenses, won't be seen likely for 10 years."

CETA would also more than double the quota of cheese imported from the European Union, which could take a bite out of Ontario dairies' market share. Mr. Hoskins said Ottawa has assured Ontario it will pay compensation to the province's cheese industry, and that it will set up a marketing campaign for local cheese.

Ontario also wants the higher quota to be phased in over the course of seven years.

The deal will also chip away at a trade barrier that currently protects Ontario wines and hard liquor, ultimately making European booze less expensive. Queen's Park did not get any assurances that local vineyards and distilleries will be compensated.

No other province has such a protectionist measure – a "cost-of-service" fee that forces producers of more expensive wines to pay more – and one government source suggested this may be why Ottawa did not agree to compensation on this point.

Mr. Hoskins said the provincial finance minister has requested a meeting with his federal counterpart to plead the case.

He touted the deal overall as a job-creation tool that would give Ontario companies a better shot at selling their products in Europe and scoring lucrative public contracts in the EU.

Asked if he was concerned that local firms will be hurt by European companies winning Ontario government contracts, Mr. Hoskins said this would not be a problem.

"Virtually every business organization, including our manufacturers and contractors, have come out and said this is an important deal that will lead to more growth within the various sectors," he said. "The opportunity that's going to exist with a level playing field for Canadian and Ontarian companies to win those contracts – I have no doubt they will win them."

"Yes, there are compensation mechanisms for the particular industries that are going to be impacted – but we got access to the biggest market in the world," he said, adding that the deal would create "a lot more jobs. We should be doing more of this." 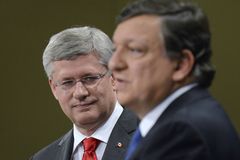 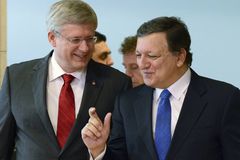