Parliament returns, Monday, with little to do. The Trudeau government, nearing a year in office, is moving quickly on several fronts, while dragging its feet elsewhere. But like majority governments before them, the Liberals are concentrating power in the offices of the key ministers and in the Prime Minister’s Office. Behind those doors, some big decisions have to be made this fall.

Liberal House Leader Bardish Chagger confirmed Sunday that Parliament will ratify Canada’s commitment to the Paris Agreement on climate change in the autumn. In the meantime, “we’ll continue to work closely with the provinces on that,” she told The Globe and Mail, pointing to a first ministers meeting on climate change expected this fall.

But Environment Minister Catherine McKenna has already signalled that the federal government intends to mandate a national carbon-reduction strategy, that all provinces must impose either a carbon tax or a cap-and-trade system on businesses and consumers, that provinces that don’t come up with their own solution will have one imposed on them, and that the carbon price will have to increase substantially over time, to meet the carbon-reduction targets established by the Harper government, which are now the Trudeau government’s targets as well.

Saskatchewan Premier Brad Wall is already howling at having a carbon price imposed on Saskatchewan. And do not expect British Columbia and Alberta (which have a carbon tax) and Ontario and Quebec (which have cap-and-trade) to respond well to being forced to ratchet up their carbon prices, which will significantly degrade disposable income and business profits.

If this feels like the National Energy Program 2.0, that’s because it is: Ottawa dictating energy policy to the provinces, this time in the cause of fighting climate change.

When the dust settles and the blood is mopped up, the feds are hoping for a comprehensive new health-care agreement targeting improved home care and pharmacare, among other priorities. But they have also signalled there will be no new funding. Unless Mr. Trudeau is actively looking to pick fights with the provinces, he may back off.

Trans Mountain, yes or no, once and for all

The Americans scuppered the Keystone XL pipeline (although the pipeline could be unscuppered, if Donald Trump wins the U.S. election); the Liberal government has already signalled its intention to veto the Northern Gateway proposal to Kitimat, B.C. This leaves the Trans Mountain proposal to twin a pipeline from near Edmonton to near Vancouver, and the Energy East proposal to convert an existing pipeline to New Brunswick. The Trans Mountain decision must be made no later than Dec. 19.

Will the government’s aggressive stand on fighting global warming afford enough social licence for cabinet to approve Trans Mountain? Or will environmental and indigenous opposition, combined with the objections of Vancouver Mayor Gregor Robertson, prompt cabinet to deliver a nay, which will almost certainly limit future development of the Alberta oil sands? What Justin Trudeau and his cabinet decide on Trans Mountain will say a great deal about how committed this government is to encouraging economic development as well as environmental protection.

Apart from ratifying the Paris Agreement and taking care of some legislative housekeeping, Parliament has little on its plate this fall, as the government continues to consult on some files and to centralize decision-making on others. To give MPs something to do, Parliament might debate a new peacekeeping mission, though this would break with precedent.

The executive is not obliged to consult the House when deploying the armed forces, but convention dictates that any proposed combat mission should seek parliamentary consent. Non-combat deployments, however, are not typically debated by the House. The Trudeau government is keen to replace the Harper government emphasis on peacemaking – in Afghanistan, Libya and the Middle East – with peacekeeping, which is why Defence Minister Harjit Sajjan has been scoping out possible deployments in Africa, with Mali identified as a possible mission.

Will the government ask the House to debate and endorse any future peacekeeping mission? Precedent would say no, but the Conservative opposition is calling for a debate anyway. When asked whether she would put a resultion on peackeeeping before the House, Ms. Chagger replied: “the decisions that are made will definitely be communicated to Canadians, I can assure you of that,” displaying a talent for not answering questions that has earned her rapid advancement in the new government.

When Finance Minister Bill Morneau presents his fall economic update, he’ll have to explain why an economic stimulus package that put the federal government $30-billion in the red hasn’t demonstrably improved Canada’s saggy rate of economic growth. Mr. Morneau will urge patience, and thus far Canadians have obliged. But Mr. Trudeau must remember what happened when voters decided his father knew little about the economy and cared less. A tiny two-seat plurality in the white-knuckle election of 1972. Trudeau the son will surely not want to repeat that history.

Although critics complain that federal governments have turned apologizing – for the Japanese internment, for residential schools, for turning away the Komagata Maru – into an industry, Mr. Trudeau remains resolved to offer an apology to and consider compensation for people who were criminally charged, fired from their government job or dismissed from the military for no other reason than being gay. The government will also legislate protection against discrimination for transgender Canadians, and create a uniform age of consent for sexual acts. Mr. Trudeau is expected turn his attention to the issue whenever he returns to work in Ottawa. The Prime Minister is in New York this week for the United Nations General Assembly; last weekend he was in Montreal at an international aid conference; it was China before that, and the caucus retreat in Saguenay before that …

Of pot and PR

A parliamentary committee must recommend by Dec. 1 how to replace the first-past-the-post system of electing MPs, as the Liberals have pledged to do. Some form of proportional representation, in which the number of seats a party has in the House mirrors its share of the popular vote – would have the support of the NDP and the Green Party. The Conservatives, arms folded, insist on a referendum to ratify whatever is proposed.

Meanwhile, another committee, headed by former health minister Anne McLellan, must report by November with recommendations on how to legalize the sale and purchase of recreational marijuana. Both initiatives could be introduced during the spring sitting of the House, which would make that sitting considerably busier and more interesting than this one is set up to be. 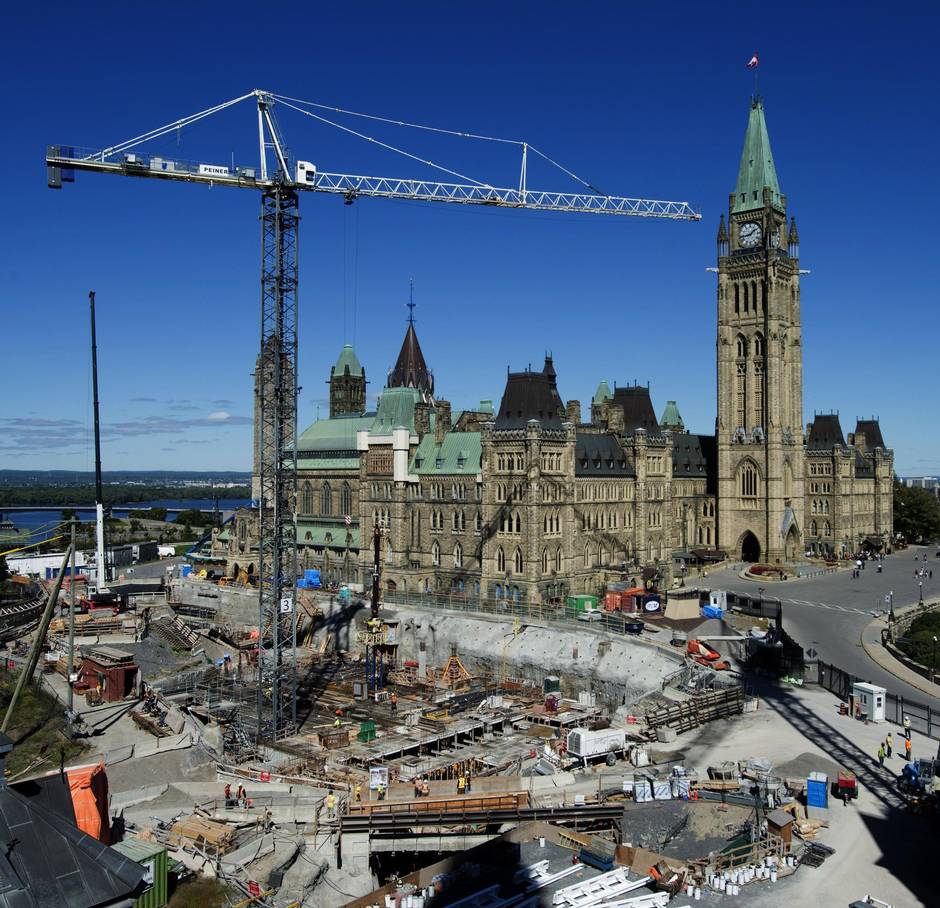 A view of Centre block and the construction of the new visitors centre on Parliament Hill in Ottawa, Thursday September 15, 2016. (Adrian Wyld/The Canadian Press)

House of Commons will move to a brand new home

This is one of the last times that members of Parliament will return from summer break to sit in the same House of Commons chamber that has been in use for nearly a century. Within a couple of years, Centre Block – home of the House, the Senate, the Library of Parliament and countless MP offices – will be closed for renovations. It may not reopen for more than a decade.

The future is steel and glass. The adjacent West Block building has been closed since 2011 for an $863-million, multiyear rehabilitation that began with a complete gutting of its insides. Months were spent tearing all the asbestos from the walls, and new wiring and insulation is being installed to bring the structure up to a building code that barely existed when it was first erected. On the outside, masonry is being reconstructed and the roofs outfitted with fresh copper – though, because of oxidization, the shine hasn’t lasted long.

The highlight of the West Block rehabilitation is the future home of the House of Commons, which will sit in the building’s rectangular courtyard. Last week, journalists got their first tour of the active construction site, which has been off-limits for five years. Though the courtyard’s walls are covered in scaffolding, the most striking feature of the future House has already been installed: large, tree-shaped columns, whose branches support a lattice of white steel beams that will be embedded with glass. According to architect Georges Drolet, the new roof is designed to let natural light fall into the chamber and has environmental features to make heating and cooling more energy efficient. The columns were needed because the existing structure could not support the new roof’s weight. 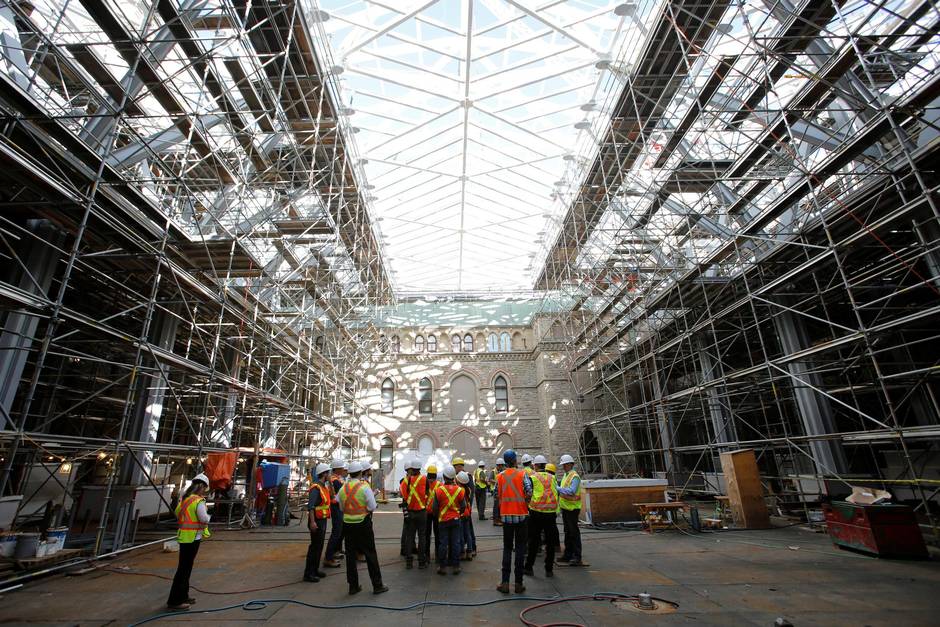 Media and officials view the future temporary House of Commons chamber during a tour of the restoration of the West Block on Parliament Hill in Ottawa Canada, September 15, 2016. (Chris Wattie/Reuters)

Elsewhere in the building, Prime Minister Justin Trudeau is set to take over the offices that once belonged to Alexander Mackenzie, Canada’s first Liberal prime minister. The offices contain a special feature useful to any politician in need of solitude: a secret staircase. Rocque Gameiro, a senior director at Public Services and Procurement Canada’s Parliamentary Precinct branch, said Mr. Mackenzie had the escape route installed so he could avoid unwanted guests hanging around in his lobby.

Underneath West Block, crews are carving up bedrock to create space for new rooms and tunnels that will eventually connect to a $130-million visitor welcome centre. Construction on that site, and West Block, is set to wrap up by the end of 2017.