Progressive Conservative Leader Tim Hudak is unveiling a series of policies aimed at diminishing the size and clout of public-sector unions, including privatizing Ontario's retail monopoly on liquor sales.

Corner stores and supermarkets would have the right to sell beer, wine and spirits under a radical overhaul of the province's alcoholic beverage distribution system proposed by Mr. Hudak.

"Let's have some more competition," Mr. Hudak told reporters on Tuesday outside a government-owned liquor store in Toronto. "Why can't I go to the grocery store and buy a six pack?"

Premier Dalton McGuinty's Liberals and former Tory premier Mike Harris also looked at selling the Crown-owned Liquor Control Board of Ontario, which operates 623 retail stores across the province. But for Mr. Hudak, the policy is the latest evidence that he intends to embrace the small-c conservative policies that were a hallmark of the Harris-era Common Sense Revolution.

Mr. Hudak plans to release his latest white paper on Thursday, titled "A New Deal for the Public Sector" that will propose major public-sector job cuts. The white papers represent his clearest stance yet on a range of issues since he became Tory leader in 2009, and will likely form the core of his campaign platform in the next provincial election, which could take place as early as next spring.

It is his approach toward the province's public-sector workers that makes it clear Mr. Hudak is stepping out from the shadow of Mr. Harris, his political mentor, and preparing to wage his own battle with union leaders.

The Tories' plan to privatize the LCBO alone could "destroy" as many as 10,000 jobs across the province, Warren (Smokey) Thomas, president of the Ontario Public Service Employees Union, warned in a statement on Tuesday. OPSEU represents 7,000 full- and part-time employees at the LCBO, a number that grows closer to 10,000 during the summer and the busy holiday season. Employ-ees successfully fought against a plan by the Harris government 15 years ago to privatize the retailer, and would do so again if Mr. Hudak wins the next provincial election, Mr. Thomas said.

"How many times are we going to go down this same old path of selling off the incredibly profitable LCBO?" he asked.

"We just can't stay on the path we're on today," Mr. Hudak said. "That involves making some tough choices about reining in spending and deciding what types of businesses government should be in and what they shouldn't be in."

Mr. Hudak said he is undaunted by the fact that others have failed to outsource all or part of the LCBO to the private sector. Ontarians can cross the border into neighbouring Manitoba, Quebec, Michigan or New York and buy beer and wine in grocery stores, he said.

"I think the public is far ahead of the politicians on this issue," he said. "Ontario is not an island."

Finance Minister Dwight Duncan said in a statement that revenue generated by the LCBO helps pay for hospitals and schools in the province. In fiscal 2011-12, the LCBO had sales of $4.7-billion and paid a dividend of $1.63-billion to the province.

"We're seeing a lot of recycled ideas coming from [Mr.] Hudak's PCs," Mr. Duncan said. "[Mr.] Hudak spins these tales that make these things sound so easy. They're not." 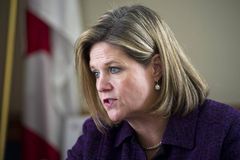 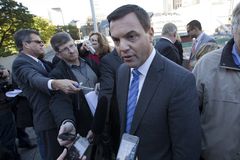