For the first time, the federal government is commissioning a running poll of Canadians to be fed to the central department that advises Prime Minister Justin Trudeau.

The Privy Council Office issued the $312,603 polling contract last month for Forum Research to conduct a telephone poll that samples 500 Canadians every week, a total of 26,000 a year, on issues of the day – or any question that interests the government. According to the tender documents, the continuous polling is scheduled to begin in early April, a week after Finance Minister Bill Morneau delivers his 2017 budget.

That makes the continuous polling another tool in the long-running centralization of the federal government that has increasingly seen policy made by a small group around the Prime Minister, rather than in the so-called "line departments," such as immigration or health. The small group can have a better sense of the political consequences on those issues, and perhaps feel bolder about setting the policy.

Let's not be naïve: When the civil servants in the PCO want polling on policy issues, it's because the political strategists 10 feet away in the Prime Minister's Office care deeply. Regular polling allows governments to ask people about how a policy is being communicated – and to change their message to adapt.

But a government that's always asking tends to get tied to the polls. The federal government has conducted rolling polls in special circumstances, like the 1995 referendum campaign. Now we're in the age when it never stops.

A PCO spokesman, Raymond Rivet, said continuous tracking will not only allow more up-to-date surveys, but also tracking on emerging issues, changes in public perceptions, and "public reactions to various new programs and policies as they are implemented."

It appears that the Privy Council Office's polling work has mushroomed since the Liberals took power. The Journal de Québec reported Tuesday that PCO polling contracts grew from $553,594 in 2014-15, the last full fiscal year of Stephen Harper's Conservative government, to $2.5-million in 2016-17, the first full year of Mr. Trudeau's. A spokesman for the Prime Minister, Olivier Duchesneau, said the increase is deliberate: the Liberal government is conducting more consultations, including polling. The PCO, he said in an e-mail, expanded opinion research to get a better understanding of Canadians' views "with a view to developing policies and creating or improving programs and services." It's not clear whether other governments are expanding those polling contracts because figures are released in an annual report after the fiscal year ends March 31.

Past reports show Ottawa actually spends far less on polling than it once did. Under Jean Chrétien, Paul Martin, and in Stephen Harper's early years, Ottawa typically spent $25-million a year, but that was slashed by Mr. Harper's Tories. Only $3.8-million was spent on polls in 2015-16.

The new contract for "continuous" polling is a cut-rate contract, too – Forum is charging as little as half what other pollsters charge. The Toronto-based firm is best known for so-called "robocall" polls using automatic dialers that tend to be cheaper, but this tender called for live interviews. The company's president, Lorne Bozinoff, declined to discuss the work, referring inquiries to the Privy Council Office. The real issue, however, isn't the contract, but what it suggests about the way government works. The PCO, the centre of government, is supposed to perform the "challenge" function of government, questioning departments on whether their plans will work. With a new poll every week, those questions are more likely to turn on what's popular. 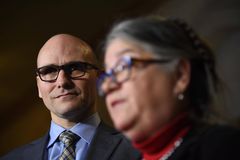