Tim Hudak is promising to get the government "out of business's hair" by abolishing the College of Trades and shaving away regulations on workers.

Standing in a salon east of Toronto, the Progressive Conservative Leader said he would immediately get rid of the body, which regulates over 100 different occupations from hairdressers to bakers.

"We don't need an expensive government bureaucracy to tell people where to get their hair cut," he said Tuesday. "Government's job is not to keep bureaucrats busy. It's to focus on what's important like health care and education."

The College of Trades' defenders say the organization is necessary to enforce standards in the skilled trades and protect consumers from subpar tradespeople.

But Mr. Hudak contends it is simply a useless layer of red tape that is unfairly limiting the number of people who can get into the trades.

He pointed to a written exam hairdressers must take to get a licence, as well as a fee salons must pay, as unnecessary measures.

"It's getting in the way of people here in this room with a new tax that will toss them out of work," he said.

Hairstylist Kailan Ambrose, 30, who attended Mr. Hudak's event, said she has been working as a hairdresser for seven years but could now lose her licence after failing the written test six times.

"It's breathtaking, it's very hard, it's a struggle," said Ms. Ambrose, the married mother of a three-year-old. "This is what I want to do for the rest of my life."

Mr. Hudak is running on a platform of cutting the size of government, which includes eliminating 100,000 public sector jobs and doing away with one-third of all regulations on business.

The Liberals, for their part, unveiled a new promise in their platform Sunday to appoint a special advisor to review the College of Trades' application process and how the new regulations are enforced. They will hold off on certification of new trades while the review is happening.

Campaigning in Sault Ste. Marie at a Catholic school on Tuesday, Ms. Wynne attacked Mr. Hudak for being too much like former PC premier Mike Harris. Mr. Harris appeared on television Monday to say he had a "pretty good" record as the province's leader and that the Liberals are only dredging up his history to avoid talking about their own scandals.

"I really hope Mike Harris keeps talking because Mike Harris reminds all of us of what it was like during those years when he was premier," Ms. Wynne said, pointing to labour disputes with education workers during his reign.

"The discord in the education system, 26 million learning days lost because of the strikes and because of the conflict that was in every school … if people liked Mike Harris then they're really going to love Tim Hudak."

Ms. Wynne spent the morning promoting a pledge to spend $150-million over three years to buy laptops, tablets, cameras and other technology for schools, as she wrapped up a four-day jaunt through the north.

Mr. Hudak, who has not yet visited Northern Ontario during the campaign, again faced questions about his decision to skip the Northern leaders' debate the previous day.

"I wish it had worked out. I don't think there's been a leader who's spent more time in Northern Ontario [than me]," he said, referencing his time as Northern Development Minister a decade ago. "I want to make sure that every part of the province of Ontario – the 905, the 416, the 613, Northern Ontario – is firing on all cylinders." 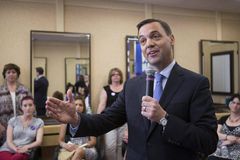 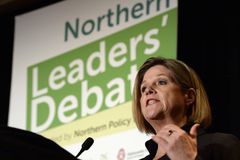 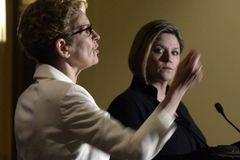 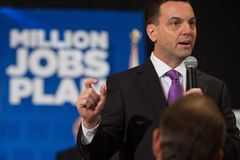 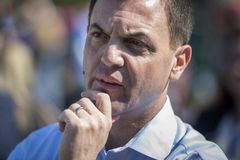