The PEI government's rush approval of nearly 2,000 immigrant investors before Ottawa shut down the island's nomination program three years ago is at the heart of allegations that rules went out the window in the province's scramble to secure foreign cash.

New statistics obtained by The Globe and Mail from Citizenship and Immigration Canada reveal that, when the successful investors' spouses and children are counted, the island actually approved more than 6,000 immigrants between August, 2008, and the end of February, 2009. Of those, about 1,000 are still waiting overseas to be approved by Ottawa.

An influx of 5,000 people, most from Hong Kong, would have made a noticeable difference in the small – mostly white – communities of Prince Edward Island. The 2006 census recorded only 250 Chinese Canadians on the island of 135,851 residents.

But people in PEI's immigrant communities say that many of those arriving under the program promptly decamped for elsewhere in Canada.

Still, Chinese immigrants on the island note that their population is clearly on the rise, and they point to the increase in Asian grocers in Charlottetown as a sign of this growth. There is also a lively discussion group at peichinese.com, where recent immigrants post picturesque photos of their new country and share tips on which local banks offer the best Chinese services. They also express their frustrations with the controversial Provincial Nominee Program that brought them to Canada.

The rush of approvals flooded the island with about $400-million – yet the island government has never released a full accounting of where the money went.

This week, the island is buzzing over the decision of three former provincial public servants to raise allegations that they witnessed wrongdoing while working for the Provincial Nominee Program.

The three women sent their allegations to Citizenship and Immigration, which forwarded them to the RCMP and the Canada Border Services Agency. They allege that some officials received cash bribes, and question how officials decided which businesses would get investor money. A spokesman for the RCMP's commercial crime unit in Charlottetown said the Oct. 3 provincial election will not affect the timing of an announcement on whether a formal investigation will be launched.

"For us, the election's a moot point," RCMP Sergeant Andrew Blackadar told The Globe and Mail. "We know it's going to happen and that won't sway us one way or the other in relation to this material."

Some of the businesses that were approved to receive investments have confirmed they got them, but most have not. Another key question is the program's effectiveness. In an interview on Friday, Premier Robert Ghiz said the internal review was too cursory to release.

"We talked to businesses, we asked them how it was and they said it was good," he said at the Premier's office downtown. "That's all we have for an internal review."

Nonetheless, the Premier blames his Tory rivals for the revival of "crazy" allegations in the middle of the campaign and suggested the efforts of the new allegations are a subversion of democracy.

The province's Auditor-General reviewed the program in a 2009 report, expressing concern that companies owned by MLAs and deputy ministers or their families benefited from the program, but the auditor didn't name names.

The auditor interviewed the immigrant investors and found none of them had any idea what happened to their roughly $200,000 investments in island companies.

"None of the immigrants we interviewed had had any contact with the investee company since making their preferred share investment," the auditor's report stated.

Ian Dowbiggin, chair of history at the University of Prince Edward Island, said the issue still has legs after three years because of all the unanswered questions surrounding the program. 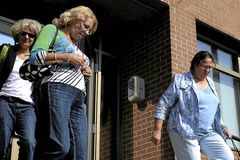 exclusive
Ottawa calls for probe of PEI immigration program
Liberals and Tories only parties to run full slate in PEI election
Follow Bill Curry and Oliver Moore on Twitter @curryb @moore_oliver
Report an error Editorial code of conduct
Due to technical reasons, we have temporarily removed commenting from our articles. We hope to have this fixed soon. Thank you for your patience. If you are looking to give feedback on our new site, please send it along to feedback@globeandmail.com. If you want to write a letter to the editor, please forward to letters@globeandmail.com.
Comments are closed