Prime Minister Justin Trudeau is off to Davos, Switzerland, today for the World Economic Forum, an annual gathering of economic, political and cultural elites in the Swiss Alps. Mr. Trudeau is expected to talk cheery about the North American free-trade negotiations, which pick up again this week in Montreal.

NEW We have a newsletter called Amplify that will inspire and challenge our readers while highlighting the voices, opinions and insights of women at The Globe and Mail. Amplify lands in your inbox every Saturday morning, with a different guest editor each week - a woman who works at The Globe - highlighting a topic of the author's choice. The topics will vary and will dive deep into issues and events around the world. The newsletter will also highlight Canadian women who are inspiring others. Sign up today.

Prince Edward Island is Canada's immigration lab. Canada's smallest province has a big economic problem: not enough workers. PEI's answer is to import them – by opening the gates wide to immigration. So far, it's working. Is there a lesson for the rest of the country? The Globe's David Parkinson does a deep dive into what the rest of Canada can learn from the island of boom.

More than 250 scientists around the world have written to the Prime Minister to ask him to continue funding a climate science research program.

The Conservative Party's leadership may be behind nomination challenges against some of its own MPs, sources tell The Hill Times.

Pierre Karl Péladeau, the Quebecor boss and former PQ leader, is returning to the political spotlight, in his own way. He's leveraged social media to energize the separatist sentiment in the province and attack federal and provincial liberals, as well as business rivals and journalists.

And in case you missed it, former Ontario premier Dalton McGuinty's chief of staff David Livingston has been found guilty of destroying documents about the gas plant cancellations.

Campbell Clark (The Globe and Mail) on NAFTA talks: "Welcome to Year Two of Mr. Trump's nervy NAFTA ride. At some point in 2018, the ups and downs might be just as dangerous for Canada's economy as the potential crash of NAFTA withdrawal."

Eric Miller (The Globe and Mail) on life after NAFTA: "If Canada ultimately does retain its preferential access in the U.S. market while pushing ahead in Asia and Latin America and better utilizing its Europe deal, it may enter the 2020s as one of the advanced economies best positioned for growth. In an uncertain world, that would be a pretty good outcome indeed." (for subscribers)

Michael Adams and Doug Norris (The Globe and Mail) on cities and Trumpism in Canada: "Many factors differentiate Canada from the United States. Our history, our institutions, our values, our public policies are all distinct. The fact that so many of us live so close together in a small number of diverse – in a few cases hyper-diverse – cities is one of the key factors that makes a politically dominant Trump-style backlash on a national scale in this country unlikely."

Barrie McKenna (The Globe and Mail) on the site of the new Amazon headquarters: "The hurdle Toronto can't overcome is Donald Trump, and not just because of the U.S. President's protectionist 'America First' agenda. The massive tax-reform package, passed by the U.S. Congress and signed by Mr. Trump in December, is a game-changer. The overhaul of the business-tax regime intentionally creates a disincentive for U.S. multinationals to invest in other countries, expand their value chains and generally integrate into the global economy." (for subscribers)

Margaret Wente (The Globe and Mail) on Trudeau and diversity: "Diversity is all very well – but only when it's good for the brand."

The Globe's Adrian Morrow spent his debut day as Washington correspondent at Donald Trump's inauguration. He shares what the 12 months since have revealed about America's insecurities, divisions and resilience: There is a never a pivot, Trump's base is more complex than it seems and both Trump and his supporters have a co-dependent relationship with the media.

What should we expect in Year 2 of the Trump administration? Three noted observers of American politics offer their views on what will happen in the second year of the Trump presidency by answering the question: "What do you think the United States will look like a year from now?" The Globe's Joanna Slater also writes that at the start of the second year, a government shutdown threatens to derail the agenda and test his leadership.

Women's March 2018 drew hundreds of thousands of protesters across North America this weekend. In the U.S. demonstrators had a clear agenda: voter registration and turning the wellspring of political activism that has emerged in the past year into results at the polls ahead of this year's midterms.

The German government may finally get up and running again. After an inconclusive election last fall, politics in Germany has been in limbo. On Sunday, the Social Democrats agreed to go ahead with the coalition plan that was formed after months of negotiations. There was concern that the grand coalition that has governed Germany in recent years between the centre-left Social Democrats and Chancellor Angela Merkel's centre-right faction would break up following an election that saw a rise in the far-right.

Turkish troops have pushed into Syria and are battling Kurdish militia, who were instrumental in diminishing the Islamic State's military presence last year. The U.S. is calling for restraint but it is unclear how this new angle in Syria's civil war will impact the larger geopolitical conflict.

Sarah Kendzior (The Globe and Mail) on women in the Trump era: "To wonder what might have happened had #MeToo emerged in 2016 is tempting; but the fact is, it might not have changed anything. Voters already knew about Donald Trump's misogyny and anti-women policies. And current female presidential contenders, like Kamala Harris or Kirsten Gillibrand, are being treated in a similar manner to Ms. Clinton – deemed 'hysterical' or 'too transparently opportunistic,' descriptors that are rarely applied to men. It is difficult to picture a female president when those who dominate discourse abhor the concept so viciously and senselessly. While in one sense, seeing the depths of misogyny acknowledged is validating, but the structural impediments for women remain formidable. But American women knew that a year ago. The movement was never about marches, it was about a change in mentality – an insistence that our pain and our rights be recognized."

Elizabeth Renzetti (The Globe and Mail) on the women's march: "The Earth makes a full journey around the sun, and it feels like nothing has changed because we're standing in the same place – working behind the same cash register, taking the same route to drop the kids off at school – but really, so much has changed. A year ago, millions of women around the world marched. They marched in tiny towns in Africa and Europe and Canada, in snowstorms and in deserts, in crowds of hundreds of thousands and in little groups that could have fit into a coffee shop." (for subscribers)

Doug Saunders (The Globe and Mail) on North Korea: "Diplomacy and deterrence won't lead to a utopian world in which Pyongyang disarms and becomes democratic. But it is our best hope for reducing the fear."

Niall Ferguson (The Globe and Mail) on social networks and democracy: "What happened in 2016 was much more than just a Kremlin "black op" that exceeded expectations. It was a direct result of the profound change in the public sphere brought about by the advent and spectacular growth of the online network platforms. In many ways, the obsessive focus of the American political class on the Russian sub-plot is a distraction from the alarming reality that – as the European competition commissioner Margrethe Vestager argued earlier this month – the big tech companies, and the way their services are used by ordinary people, pose a much bigger threat to democracy. It is the threat from within we really need to worry about – not the threat from Putin."

Andrew Stark (The Globe and Mail) on Trump country: "In the reportage from Trump Country, it is these two grievances – against elites for their cultural and economic condescension; against illegal immigrants for their political and civic presumptuousness – that come to the fore. But does Mr. Trump himself give voice to them? No. He turns them precisely inside out." 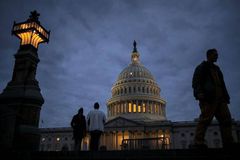