It has been said of columnists that they are often wrong but never in doubt. In that fearless spirit, here are seven predictions for Canadian politics in 2016. The author is every bit as certain they will turn out to be true as you should be.

The Liberals stumble, then hit their stride. The rapturous honeymoon that Prime Minister Justin Trudeau enjoyed ends with a thump in April with the arrival of fill-in-the-blank-gate. Even before that tawdry affair hit the headlines, the sheen had started to come off the shiny new government once it became clear that Liberal commitments to fight climate change and to renew the relationship with indigenous Canadians were going to blow a hole in Finance Minister Bill Morneau's deficit projections. Nonetheless, the Liberals are still some distance from unpopular, as the always-smiling Prime Minister and his deeply competent cabinet pursue their agenda for change. And the promise of high-speed rail from Windsor to Quebec City and between Calgary and Edmonton – who wouldn't get excited about that?

Tom, we hardly knew ye. Thomas Mulcair has always insisted he is willing and able to lead the NDP into the next election, but everyone knows that won't happen. He would be five days short of his 65th birthday at the time of the next vote, and he would still have a beard. The New Democrats are unlikely to do any better than last time – and might even do worse. At a party conference in May, Mr. Mulcair announces he will stay on as leader until the party chooses his replacement in the fall of 2017. Already he is being referred to as the best prime minister Canada never had.

Rona! Rona! Rona! She's young, competent, unflappable and gets under Justin Trudeau's skin like nobody's business. Conservatives begin to wonder whether it was a mistake to choose Rona Ambrose as interim leader, which disqualifies her from running for the permanent leadership in 2017. With the Tories climbing in the polls, the party faithful agree that the new chief must be telegenic and approachable while remaining faithful to the creed of lower taxes, balanced budgets and less regulation. Could the rules be changed to let Ms. Ambrose run? Should she step down as interim leader in order to go after the real thing? Ms. Ambrose insists she's happy where she is and has no greater ambitions. Still …

Premiers aren't popular. Christy Clark in B.C., Philippe Couillard in Quebec, Rachel Notley in Alberta and Kathleen Wynne in Ontario – they all seem to be part of some perverse competition for least popular premier. All face, and are failing to master, the problem of bringing their budgets under control while still pursuing measures to reduce greenhouse gases. As other programs and services have to be cut to fund green-energy alternatives, voters complain about new taxes and higher electricity bills. In Manitoba, NDP Premier Greg Selinger has already been shown the door. Apart from perennially popular Brad Wall in Saskatchewan – no, for the hundredth time, he doesn't want to run for the Conservative leadership! – no premier seems safe from the voters' wrath.

The 60,000th Middle Eastern refugee arrives in Canada. Though it has taken time to get the process of assessing and screening refugees and arranging flights up and running, once the flow of Middle Eastern refugees to Canada gets under way, it never stops. As conditions in Syria and Iraq continue to deteriorate, and European leaders push back against the flood of refugees pressing against their borders, Canadians step up, with families, faith and community groups organizing sponsorships and the Liberal government steadily increasing its own quota of state-supported applicants. Unfounded security fears ease, polls show a growing majority of Canadians support the airlift, and it appears 2017 will witness an even greater influx. Canada has never felt better about itself.

"Congratulations, Madam President." On Nov. 9, Justin Trudeau calls Hillary Clinton to congratulate her on being elected the 45th president of the United States. There had been some nervousness during the election campaign, when Ms. Clinton's halting performance during the first presidential debate created a bump in the polls for challenger Ted Cruz. But Mr. Cruz's harsh, anti-immigrant, anti-health-care, anti-anything-to-do-with-government rhetoric doomed his chances in the general election for the same reason it delivered him the Republican nomination: There are plenty of extremely angry voters, but even more who are not that angry. Mr. Trudeau probably went too far during the campaign when he delivered a speech lambasting the "current fashion for exhuming the racist dogmas of the disgraced past," but neither the Prime Minister nor most other Canadians feel any need to disguise their delight as America elects its first female president.

We're going to have more democracy, whether you want it or not. There has been some surprise at the open-minded and non-partisan approach of the parliamentary committee studying electoral reform. Nonetheless, it's pretty clear that NDP MPs favour replacing the first-past-the-post system of electing MPs with a form of proportional representation, which critics point out would increase their seat count. The Liberals prefer a ranked ballot, which critics point out would almost invariably produce Liberal governments. And the Conservatives favour the status quo, which critics point out is the only way that party is likely to form a majority government. Justin Trudeau warns that if the committee cannot reach a consensus, cabinet will impose one. Then hold a referendum on that choice, Rona Ambrose warns back, or we'll block the bill in the Senate. Political junkies rub their hands with glee at the tempests to come in 2017.

How does Canada compare when it comes to resettling refugees?
December 31, 2015
Why Obama and Trudeau are so close
December 9, 2015 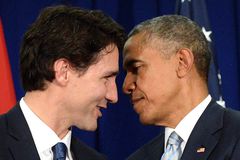