The Alberta and federal governments are planning a new push to persuade skeptics in Central Canada that a proposed $12-billion oil pipeline will deliver them more benefits than it will pose risks.

Alberta Premier Jim Prentice plans to travel to Quebec City and Toronto in early December to meet Quebec and Ontario premiers, who last week spelled out a joint list of seven criteria that TransCanada Corp.'s Energy East project must satisfy to secure their support.

Philippe Couillard and Kathleen Wynne included in that list an assessment of climate change, and whether the expansion of oil production and transportation across the country is consistent with Canada's commitment to significantly reduce its greenhouse-gas emissions.

The Alberta Premier said Sunday it is essential for oil producers in his province to reach new markets by pipeline. "We need pipelines in every direction and that's an imperative for our province."

However, Mr. Prentice said he is prepared to work with his Quebec and Ontario colleagues on a national strategy, including the highest environmental standards for pipelines and Alberta's own climate policy.

"I think they accurately identified the issues that we need to work together on," Mr. Prentice said in a telephone interview from Calgary.

"I'm quite encouraged by their openness and their willingness to sit down and discuss those issues. They are the sorts of matters that need to be addressed for any project that is a nation-building project."

Natural Resources Minister Greg Rickford said on Friday federal ministers will be travelling to Quebec to highlight advances that Ottawa has made in the regulation of pipelines and marine transport of oil, and that Ottawa will soon introduce legislation to impose tougher rules on pipeline operators.

Environmentalists have been battling in British Columbia and in the United States to block the construction of pipelines and export terminals, citing both risks of spills and the rapidly growing GHG emissions from the oil sands that will make it difficult for Canada to meet and exceed its emission targets.

Now, TransCanada is facing mounting opposition to the Energy East project, particularly in Quebec where the company plans to build an export terminal near beluga calving grounds in the St. Lawrence River and where support for tough climate action is strongest in the country.

With the 4,600-kilometre Energy East project, TransCanada would convert capacity on its west-to-east natural-gas pipeline between Alberta and Quebec, and construct new pipeline through Quebec and New Brunswick, with terminals at Cacouna, Que., and Saint John, N.B.

In addition to insisting that a greater focus be placed on climate change, Ms. Wynne and Mr. Couillard said TransCanada must also include world-leading safety and environmental standards, appropriate consultations with First Nations and assurances that central Canadian natural-gas consumers won't be hurt.

Mr. Prentice, who took over as Premier in September, said Albertans are determined to see the crude produced in the province exported off the North American continent.

He noted that Alberta is already one of the few jurisdictions to impose a carbon price on oil producers – $15 a tonne when operators exceed their regulated targets – and has invested $1.3-billion in carbon-capture technology that is touted internationally as a key tactic for reducing emission from fossil-fuel combustion.

But he acknowledged that more needs to be done. By the end of the year, his government will release its new price for the carbon levy, and will issue a draft policy on energy, the environment and carbon.

"Alberta as we move forward is interested in being a constructive player in terms of the environment and climate change, nationally, continentally and internationally," he said. But he added that the province won't unilaterally impose levies or regulations that would cripple the competitiveness of its most important industry.

Environmentalists say the current pace of growth in oil sands production would make it virtually impossible for Canada to meet its commitment to reduce greenhouse-gas emissions by 17 per cent from 2005 levels by 2020, a conclusion shared by the now-defunct National Roundtable on the Environment and the Economy.

Greenpeace Canada climate campaigner Keith Stewart said the growth in the oil sands in the past decade has completely offset the reduction in emissions achieved by Ontario's elimination of coal-fired electricity. Mr. Stewart said governments would have to impose the equivalent of a $100-a-tonne carbon levy on the oil sands to bring the sector's development in line with an appropriate climate strategy. 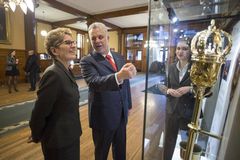 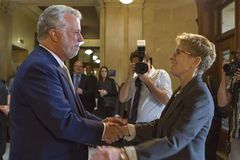