A dying breed of Tory once viewed as a potential rival to Stephen Harper, Jim Prentice said he entered political life with an end-date in mind: 2011.

That would mark a decade in federal politics for Mr. Prentice, 54, a married father of three with a reputation as a capable, moderate cabinet stalwart. A career attorney, he sought only a brief tenure of service in Ottawa.

"I've also been of the view that you should leave at the top of your game," Mr. Prentice told The Globe and Mail.

In what was nonetheless a surprising announcement Thursday, he did just that, telling Mr. Harper that he'd immediately drop his file as Environment Minister and resign from Parliament altogether by the end of the year. He'll then take a lucrative post as a Canadian Imperial Bank of Commerce executive.

The move leaves Peter MacKay as the last cabinet voice of the party's moderate wing of former Progressive Conservatives. Mr. Harper also loses one of his steadiest hands, one he had regularly relied on for difficult and undesirable portfolios.

Mr. Prentice's sudden decision, however, has raised speculation he could be retreating to the private sector to gather support for a future Conservative leadership bid that may pit the united party's moderates against social conservatives. Although some insiders insist he no longer has leadership aspirations, Mr. Prentice's post would allow him to avoid being tarnished by any decline in Tory fortunes and re-enter politics as what one Tory called "a born-again virgin."

He'd follow a long line of politicians who've gone to the private sector only to return to public life - John Turner, Jean Chrétien and Mr. Harper among them. Mr. Prentice will also now move to Toronto, where he could build support in the boardrooms of Bay Street.

"I am closing the door on political life," he said, stressing his support for Mr. Harper and the party. "I have completed that tour of duty."

Since the party took power in 2006, Mr. Prentice has been both indispensable (Mr. Harper called him government's "chief operating officer') and potentially dangerous for the Prime Minister - a skilled, bilingual successor in waiting should Mr. Harper ever falter. Mr. Prentice was an early, but unsuccessful, candidate for Mr. Harper's job as leader.

His four-year cabinet career has not been easy, filled with contentious files. It began in Indian Affairs, where he coped with considerable aboriginal anger when the Harper government all but walked away from the Kelowna Accord. In one year as Industry Minister, he authored contentious copyright legislation.

As Environment Minister, he won certain victories - expanding Canada's national parks - but was regularly shelled for the government's inaction on international climate-change treaties and loose standards on oil sands development. Roger Gibbins, head of Calgary's Canada West Foundation, called Mr. Prentice the "best energy minister that western Canada has ever had," referring to his hands-off approach to the oil sands.

"It's hard to know whether that lack of progress was his doing, or attributable to the Prime Minister's lack of interest in the file," said Rick Smith, executive director of Environmental Defence. "I guess we'll never know."

Mr. Prentice said he was "unapologetic" about his time as Environment Minister. "I think we are doing really exceptional work on the environment," he said. While environmentalists say his record is mixed, many will surely prefer the calm hand of Mr. Prentice to that of John Baird, a fiery partisan who will return to the environment file on an interim basis.

It was in September that a CIBC board member first approached him "quite out of the blue," Mr. Prentice said. He later met with the bank's chief executive officer.

Since that time, Mr. Prentice has made a series of major decisions that drew praise from environmentalists. For instance, he struck a federal panel to review oil sands water monitoring and this week blocked a proposed British Columbia mine development. He said Thursday this was all business-as-usual - rejecting the suggestion he was wrapping up loose ends.

He'll be with CIBC next year when the federal Bank Act is up for review. New Democratic Party Leader Jack Layton, as such, criticized the "close relationship" between banks and the Harper government.

Mr. Prentice rejected any suggestion that there's a split within the party.

"There are two legacy parties but there is one Conservative Party. And I don't think anyone attaches importance to this point to which of the legacy parties people came from," he said.

"I think he felt like he's probably gone as far as he can go," said Jim Rooney, 62, who once shared a law practice with Mr. Prentice. "I'm happy for him, but a little bit sad for the country. He's a great minister. We need people like him in Ottawa."

Jim Prentice plays down hopes for climate deal
May 2, 2018 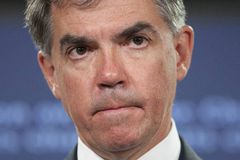 Follow Josh Wingrove and John Ibbitson on Twitter @josh_wingrove @JohnIbbitson
Report an error Editorial code of conduct
Due to technical reasons, we have temporarily removed commenting from our articles. We hope to have this fixed soon. Thank you for your patience. If you are looking to give feedback on our new site, please send it along to feedback@globeandmail.com. If you want to write a letter to the editor, please forward to letters@globeandmail.com.
Comments